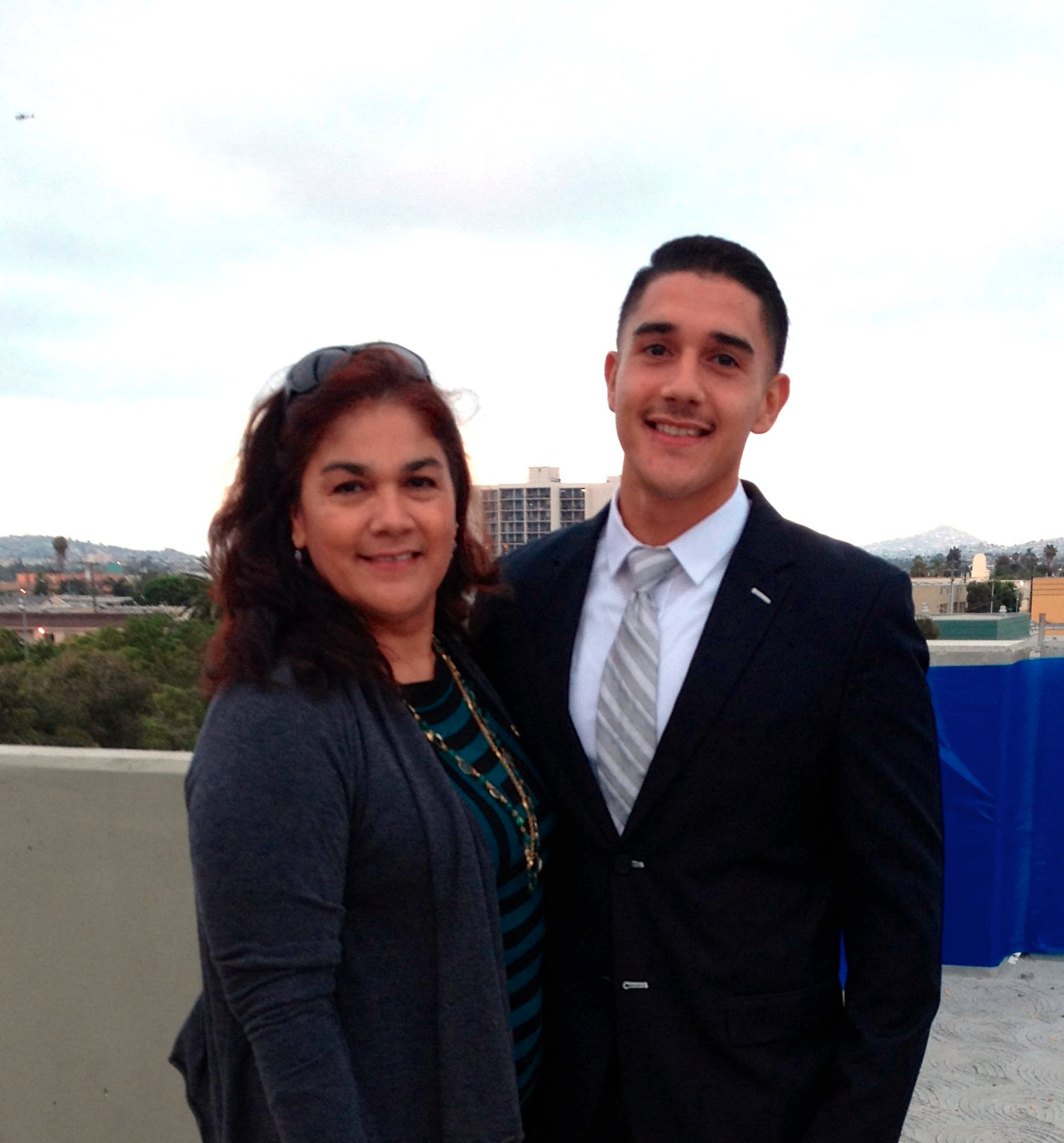 The Admissions Blog explores first-generation Harvard students' experiences applying to and attending college. The interviews below have been edited for concision.

Jesse G. Sanchez is a Harvard College junior. He grew up in City Heights San Diego, Calif., where his mother, a Mexican immigrant, raised him in a single-parent household. Sanchez is helping to found the Harvard College First Gen Student Union, a student initiative that seeks to cultivate a community and peer-mentoring system for first generation students and will be the first officially recognized organization for first generation students on Harvard’s campus. He was a panellist at Crossroads: The First Generation College Student Experience on campus on Sept. 26.

I would say absolutely. When I had a midterm or a paper or a final or something else stressing me out about college, I would call my mother, she would impart her wonderful, beautiful, smart wisdom on the topic in general, but that inability to say “When I was in that situation I did this” sort of limited the ways that I thought I was supported. Coming into this brand new culture and not necessarily having this kind of social capital really limited my interactions with others. I didn’t do it intentionally, but when I didn’t know how to tie a tie, for example, or know the difference between different kinds of suit jackets, I couldn’t relate to many people who were here who had those specific experiences in the very beginning. Feeling like I didn’t belong here was an aspect of my experience, but then, on the other hand, coming here and being a first generation college student gave me some crazy sort of motivation to make the most out of the opportunities and, also to make the most out of the relationships here and to learn from others. It provided me with this incredible, incredible desire to just get to know people and learn from their experiences.

Number one, set your goals as high as you possibly can. There’s this saying that I love so much: reach for the stars, so if you fall, you land on the clouds. Make sure you set the bar high for yourself. No one else is going to set this bar high for you. You have to do it yourself, and I’m going to tell you that you can do it. Two, look out for scholarships. Apply to any scholarships and opportunities available in your city, in your state, and in the U.S. as a whole. Look at the big-name scholarships, like Gates-Millennium, but also at local scholarships, which give you a better chance of getting the scholarship because they have a smaller applicant pool. Number three, have this conversation about your dreams, about your ambitions, about what this college dream means to you. Reflect on what this means to you, and share this with whoever is in your life: your parents, your guardian, etc. Make sure that you remember that all of your successes are the successes of those who care for you.

Daniel M. Lobo is a Harvard College senior. He grew up in East Boston, Mass., as the son of Cape Verdean immigrants. Lobo is is helping lead efforts to gain official university recognition for the Harvard College First Gen Students Union.

I was pretty independent during my college application process, and that came with its own set of pros and cons. I was pretty proud of myself by the end of it for having figured out how to apply to college on my own. Since I knew my parents weren’t in a position to pay the $75 application fee for all of the selective schools I was applying to, I figured out that if I just wrote a letter explaining my circumstances I could get a fee waiver. I did that for all my schools, which is something I realized my peers in high school didn’t know you could do. I think I was pretty resourceful, but I could have done a lot more research about the types of schools that would have been a good fit for me. I essentially applied to top tier schools—Ivies and a few other tier one schools—and then a safety school. I realize in retrospect that I completely ignored small liberal arts schools, and I feel like I would have done really well at an Amherst or a Williams. That was a downside to doing it on my own—I wasn’t as well informed as I could have been.

In the beginning it definitely made it very difficult. Aside from the fact that I didn’t feel as academically prepared, and I wasn’t as academically prepared, for me—and this is particularly funny because I’m from so close to campus, but it’s just an entirely different world—I wasn’t used to being around such a high concentration of wealth. When I would have conversations with people and they would casually drop that they weren’t on financial aid, would make me think “wow, there are really wealthy people here.” It was really hard to be able to communicate with them when I first got here because I just didn’t know what we would talk about. They would talk about vacations that they’d taken, and I’ve never gone on a vacation outside of the States, I could never afford to do that. Not being able to communicate with a lot of my peers felt very isolating. I felt like I didn’t really have any social enclave to which I could participate in.

It was also difficult for me to realize that academic conversations are always taking place here. Even when you’re not in class, you still have to be turned-on academically, and people like to talk about interesting things, and that was really exhausting for me. I wasn’t used to being that academic all the time, I was used to being academic in a setting and then turning it off. That was very difficult, I felt like I wasn’t smart enough to carry on a conversation with people, which made me avoid things like study breaks or things that would necessitate further interaction with people outside of class, which I was very much intimidated by.

I would advise that, as a first gen, it’s really important to realize going into the college process that these may be two competing worlds—the world that come from before you enter college, and the world that you’ll be in once you enter college. I definitely think I’ve changed a lot since my time at Harvard, which was my only goal. I came here wanting to walk out of Harvard a different person than when I walked in. The fact that I feel that happening already is amazing, but in acquiring this new language, this new form of social capital, and this new way of thinking, it’s almost like I’m losing the ability to do so with the people from my previous community. My advice would be to really think about ways that you can bring those two worlds as close together throughout your college experience, and keep those who you really love who aren’t part of your college experience as close to it as possible, which can be really hard. It might be a little too late for me, but I’m still figuring out ways to bring them together, but it’s really difficult, and it can cause a lot of turmoil for a first gen, so I think it’s important to think about coming in.

Cody R. Dean is a Harvard College Senior. He grew up in Crab Orchard, W.V. Dean was a panelist at Crossroads: The First Generation College Student Experience on campus on Sept. 26.

It affected me in terms of a lack of information. I didn’t really know anything about applying to college—what the process was like, what I should be thinking about, what the programs were like, what it meant to be a liberal arts school versus something more science oriented—beyond what was on college websites. It was all a big sort of put myself out there and see where it went experience. I applied to 32 schools, which was way more than any of my friends had applied to. Even beyond my own lack of family knowledge and lack of role models there, the guidance counselors were not very familiar with out of state applications processes. Having to write recommendations and fill out forms that they weren’t used to was all new to them, too.

Absolutely. I felt more uneasy coming here than I did going through the application process and waiting and then deciding. For all of that you have limited data points. You can visit if you can afford to visit. Harvard flew me here, so I got to see it. I knew what I knew online. I met my alumni interviewer, who was the recently retired president of Concord College, so I had his perspective. But, no one had gone to Harvard from my school for 30 or 40 years, so there were no recent alumni around. Once I go here, though, I immediately felt like I didn’t fit in. I filled out a transfer application to another school and very seriously considered leaving, not because I didn’t feel supported or that I thought that there weren’t enough resources here for me or that it was the wrong fit per say; it was socially that I didn’t really immediately find a family. It took me a while as well in high school to find that, but realistically, I couldn’t chart out a path to me being comfortable here and that unknown was really unsettling. There are many other first gen students here, and the longer I was here, the more I fell in love with this place and found the people from similar backgrounds. That started with the Harvard Financial Aid Initiative having dinners and meeting like-minded people. You don’t always stay friends with them, and I honestly don’t even go to the dinners anymore, but it gave me familiar faces. As I found more people from similar backgrounds, I became a little more comfortable.

Number one, don’t sell yourself short. That’s very cliché, but I never thought that I would get in here—numbers wise, personality wise, interest wise, extracurricular wise. I didn’t think that anything about me exuded Harvard. I was a poor kid from West Virginia with an accent. No one in my family had ever been to college. Who was I to think that I was going to apply this place, let alone get in and then come here and succeed? But, if it’s something you want to do, don’t let the construction you have of yourself and the limit you have in your mind limit what you want to do, because you’re really the only person who’s limiting it. Two, if you do come to someplace like this, be prepared for a challenge, but also be confident in your abilities. You wouldn’t be here, you wouldn’t be thinking about applying to these places, if you didn’t have some sort of confidence that would help you overcome any of that.