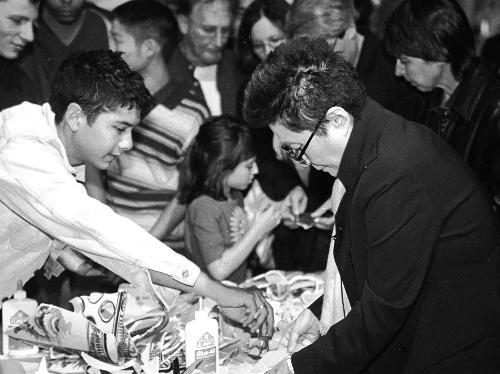 With a performance that at one point had her in a giant black cloth bag with a Harvard lecturer, Yoko Ono surprised a sold-out crowd at the Carpenter Center for Visual Arts last night.

Ono came to the center to inaugurate her art installation, “Mend Piece to the World,” on the street-level terrace outside.

The piece, dedicated to “The American People From Yoko Ono,” consists of broken pottery objects from all parts of the world. Ono urged the public to participate with her in reassembling the pieces as part of a healing and mending process after the tragic events of Sept. 11.

Once inside the lecture hall, Ono took a different tack as she openly criticized the U.S. government for their military actions. She said she felt that violence was not the answer.

“We have to stand for peace and not fight for peace,” she said.

She pointed to six identical teapots, some of which were disfigured or broken in different ways. She described each pot, one with no handle or top as being “art because you can’t use it” and another as “abstract expressionism in the making.” The audience laughed, but all were quiet when Ono pointed to a teapot that was in shambles, and said that it was “the World Trade Center, fully destroyed.”

She then picked up another teapot that was fully intact and explained that it was art before the attacks, fully installed and unbreakable.

Bruce Jenkins, the film curator of the Carpenter Center and a senior lecturer on visual and environmental studies, moderated the event.

When he asked about her experiences being a woman in a male-dominated world and being and coming into a Western culture from a non-Western one, Ono answered that she felt twice removed, and that it was not easy to deal with the criticism of the media and public. She first jokingly remarked, “Well...I was one of two people responsible for Pearl Harbor,” alluding to her unique place in international pop culture as the woman accused of breaking up the Beatles. At the same time, Ono said, being an outsider “can teach insiders” a lot about themselves.

“I had to cope...but I had pride in being an outsider,” she said.

After a question-and-answer session, Ono put on a provocative mini-multimedia show which referenced her work, including her recently released CD, Blueprint for a Sunrise. Its theme is triumph over adversity, more specifically getting past domestic abuse to hope and rebirth.

To demonstrate these themes, Ono first went into a black cloth bag with the moderator, Jenkins. They started to take off some of their clothes, placing them outside the bag. Their shoes were followed by their socks and then, their jackets.

They began conversing and moving around. She then emerged, leaving Jenkins to remain in the bag. Ono took the microphone and began screaming and singing incomprehensible words to the rhythmic beat of drums. With blurry, abstract images of people as a backdrop, she interacted with the audience, moving to different parts of the room, and sang, “Where do we go from here?”

The screen slowly brought to light a photograph of her with her late husband John Lennon and her son, Sean. She slowly fell to the ground and started to cry as sounds of birds tweeting and peaceful images of trees took over.

Ono concluded the lecture by stressing her stance against violence—a sentiment that met with applause.

“We will survive this,” she said. “Use wisdom, not muscle.”

After Ono finished her presentation, Jenkins too emerged from the bag—belt conspicuously unbuckled, prompting gentle laughter from the audience.

The lecture was presented in conjunction with a major touring retrospective of Ono’s art, “YES Yoko Ono,” which opened at MIT’s List Visual Arts Center on Oct. 16. The exhibit, which will be up until Jan. 6, is sponsored by the Japanese Society of New York City and includes about 150 works tracing Ono’s 40-year career as a pioneer in conceptual art.