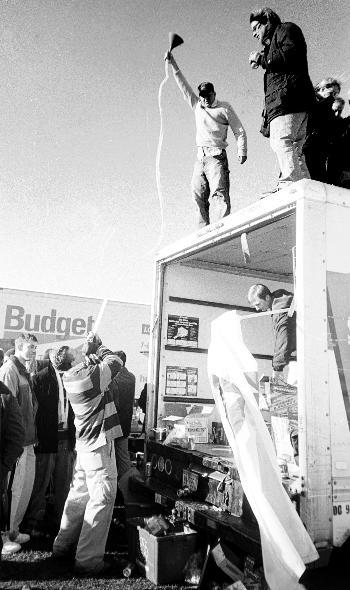 At Saturday’s long-debated keg-free tailgate, students swigged cans of beer, handles and even Jell-O shots—but, in contrast to the last time The Game was at Harvard, no one ended the afternoon at University Health Services (UHS) with alcohol poisoning.

Two years ago, the Harvard-Yale game resulted in four cases of alcohol poisoning, a statistic Dean of the College Harry R. Lewis ’68 has cited to explain the rationale behind this year’s keg ban.

Saturday’s tailgates, on a muddy field in frigid weather, culminated weeks of debate over whether the administration’s decision to ban kegs would curb irresponsible drinking—or endanger students who chose to guzzle hard liquor instead.

“I think everyone purchased as much alcohol as before,” said Pforzheimer House Committee Chair Richard J. Vivero ’03.

At the Isis tailgate, members of the female final club set up an ice luge, a block of ice with grooves that channel liquor straight from the bottle to the mouth. They also offered fellow Game-goers cans of beer and cups of red Jell-O prepared with hard alcohol.

HoCo chairs had presented a petition to Lewis last month claiming that the ban would, in fact, lead to a higher overall level of intoxication.

Although no students suffered from alcohol poisoning Saturday, about seven were admitted for alcohol intoxication, which is less severe than poisoning, according to a UHS employee on duty Saturday afternoon.

UHS Director David S. Rosenthal ’59 could not be reached for comment yesterday.

Ghia E. Godfree ’00, who came back to campus this weekend for The Game, said the tailgate was just as rowdy as she remembered from her years at Harvard before the keg ban.

“People were out to have a good time and the ‘no keg rule’ was not going to stop them,” said Godfree, who noted an increase in hard alcohol and mixed drinks.

In an e-mail, Lewis wrote that attendance at the tailgates may have been less than usual.

“Some have suggested that the cold, windy weather held down the numbers a bit,” he said.

Some students said they also had trouble finding the tailgates, tucked away behind the stadium at the Soldier’s Field athletic complex. Two years ago, the festivities took place on the Business School parking lot.

“I did get a few calls from people wondering where the heck it was,” said Eliot House HoCo Co-Chair Emily R. Murphy ’03. “That’s what cell phones are for.”

In contrast to other HoCo chairs, Vivero said the decision to relocate the tailgates was a good one because it prevented intoxicated students from crossing the streets to the stadium.

But with hundreds of cars and thousands of people, the intramural fields were extremely muddy.

“It couldn’t be foreseen because of the rain the day before,” Murphy said.

Some students had said they worried the keg ban would be environmentally unfriendly, replacing kegs with cans and bottles.

“There was way more of a mess,” said Leverett HoCo Co-Chair Miriam S. Udler ’03, comparing this year’s tailgates to the ones two years ago.

“I stepped on lots of cans, and handles were buried in the mud,” said Vivero, who added that cups might have replaced the cans if kegs had been allowed.

Harvard University Police Department (HUPD) officers inspected trucks as they entered the athletic complex to ensure no kegs made it to the tailgate.