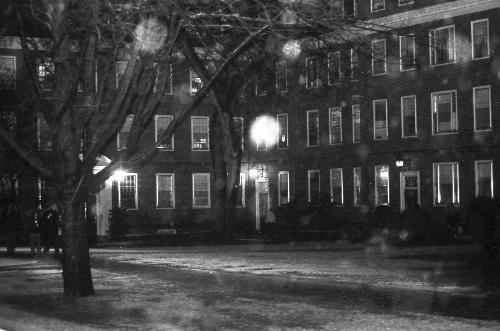 In the late 1990s, an Adams House resident staged a multi-media performance called the “Dancing Deviant,” which attracted the attention of the campus for its nudity and sexually explicit material.

According to Geertrui Spaepen ’99, this event was emblematic of the quirky atmosphere that defined her Adams House experience.

While Spaepen describes the artistic quality of her undergraduate House, others had strikingly different experiences in their Houses before randomization —from the athletic Mather to Eliot, remembered by some as a bastion of elitism.

When then-Dean of the College L. Fred Jewett ’57 instituted the change in housing assignments from a system where blocking groups could rank their top four House choices to a completely randomized selection process in 1995, some worried the move would spell the end of House spirit and community.

And although Dean of the College Harry R. Lewis ’68—who carried out Jewett’s plan—says the Houses have become more equal, the personalities that defined some Houses before randomization have faded.

The envelopes first-years received under their door early this morning will assign them to Houses that are radically different than they were just five years ago, when Houses were still inhabited by students who had picked them.

According to Loker Professor of English Robert Kiely, who was Master of Adams House for 26 years, the Plympton Street residence was always characterized by an artsy feeling.

“The Adams House students over time liked their reputation for being somewhat different and offbeat,” Kiely says. “It was almost always a place where a lot of actors and actresses convened.”

Spaepen says the eccentric atmosphere was so established in Adams that she felt like an intruder when she entered the House as a member of the first randomized class.

“We were not actually that welcomed when we arrived,” Spaepen says. “Adams already had that snooty feeling.”

She says the four or five performances of the “Dancing Deviant” put on per year constituted only a few of many free-spirited Adams events.

“He did a naked dance,” Spaepen says. “There were things like that all the time.”

Even the formals, a stuffy tradition in many of Harvard’s 12 Houses, were wilder in Adams.

At the yearly “Naked Formal,” Adams House residents would invite models for classes in the Department of Visual and Environmental Studies to come nude.

According to Spaepen, many other students would end up taking off their clothes as well.

“When you went up to the library there were naked people milling about,” she says.

Although Spaepen says the arts continued to be popular in Adams, by her senior year she noticed fewer people were dressing up in drag for their traditional Halloween “Drag Night.”

Only a few blocks away, Mather House retained a much quieter atmosphere—since the overwhelming percentage of athletes who lived there were often away at practices or games, according to House Master Leigh G. Hafrey ’73.

Hafrey says when he and his wife, Sandra A. Naddaff ’75, took over as Masters in 1993, Mather housed a disproportionate number of athletes, including most of the varsity football team.

While Hafrey remembers some raucous weekend parties, he says the silence when the teams were on road trips was more noticeable.

“For us, the striking thing was a lot of people weren’t around,” Hafrey says. “It was kind of lonely.”

Dinner in the dining hall usually consisted of the football team sitting together at one of the three long tables that used to span the length of the room, Hafrey says.

But not every House’s character was formed around students’ mutual interests. Some Houses, like Eliot and Pforzheimer, fell prey to self-segregation by wealth or race, according to Matthew Gentzkow ’96, a tutor in Eliot House.

“Eliot was supposedly the blue-blood, ‘more Harvard than Harvard’ House,” says Gene Koo ’97, a tutor in Pforzheimer House who lived in Eliot as an undergraduate. “If you were to go through the yearbook I think you could basically look at the skin color of people in the House and you would see it was decidedly lighter skinned than Pforzheimer House.”

In 1996, The Crimson reported that only 4.8 percent of Eliot, Winthrop and Kirkland residents were black, compared to 24.6 percent of residents in the Quad Houses—Cabot, Currier and Pforzheimer.

Mather housed the highest percentage of white students with 78.9 percent.

Koo says the lack of diversity in Eliot sometimes made the House feel stale to him.

“I think the people who fit in really fit in and liked it there a lot,” Koo says. “What I noticed is that when the [randomized group of] sophomores came in it was kind of a breath of fresh air for me.”

A group of 26 minority House tutors sent a letter to University administrators in the spring of 1998 arguing that randomization had destroyed the community support minority students had grown to depend on in some Houses.

Even before randomization, some Houses had less striking personalities.

According to Sarah Rimsky ’98, who lived in Winthrop House as an undergraduate, her house was known as the “high school gossip, social House.”

But Rimsky says this reputation was more of a function of the thin fire doors—which made eavesdropping inevitable—rather than the type of person that chose to live there.

Gentzkow, a former Kirkland House resident, says that even before randomization officially began, there was already a degree of randomness as to which students were placed in the various river Houses.

“Everybody would put those down and there was still quite a lot of luck whether you got those,” Gentzkow says.

Adam Levitin ’98, a former Currier House resident and Crimson editor, says Currier was characterized by a similar feeling. It was the House of choice for an entire spectrum of students—those who wanted singles, who did not want to live in river Houses or who were drawn to the minority community.

“I didn’t like the character and the bustle of river Houses,” Levitin says. “Everyone’s in everyone else’s business. I felt going to the Quad was like moving to the suburbs.”

Seven years later after the fact, Lewis says he does not believe randomization has homogenized the Houses.

“That was never the intent and it has not happened,” Lewis writes in an e-mail. “Cabot still wins the Straus Cup every year, after all!”

According to Lewis, students are now “monotonically” happier with their Houses than those who lived in pre-randomized Houses.

“No House has to start every fall knowing it was full of students who had been asked their preferences and had explicitly stated they did not want to be there. And no House can take for granted that students should be happy to be there because it was, for the most part, their first choice,” Lewis writes. “Every House does a better job now, I think, welcoming and incorporating its sophomores into the community.”