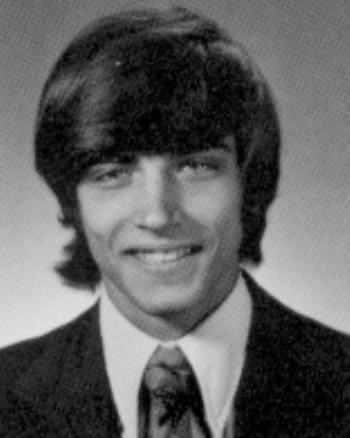 In November of 1976, the Class of 1977 experienced one of the most horrifying tragedies in school history.

One of the Harvard football team’s star defensive backs was stabbed to death and another student wounded after a night of team celebration that began with dinner at the Harvard Club and ended with an outing to the Naked-I lounge, located in the heart of what was then called the “Combat Zone.”

The football players were heading to their cars after the strip club’s 2 a.m. closing when prostitutes approached them and stole the wallet of Charles Kaye `78.

A few pursued the prostitutes only to run into their pimps—Leon Easterling, 41; Edward J. Soares, 33; and Richard S. Allen, 36—one of whom stabbed Thomas Lincoln `77 in the abdomen. Andrew Puopolo `77 was stabbed in the heart and lungs after he went to Lincoln’s aid.

“He collapsed in my arms and his eyes rolled back,” said teammate, Raymond “Scott” Coolidge `78.

Puopolo’s heart was perforated in two places and one lung was punctured; by the time he arrived at the hospital just minutes later, his heart had stopped and doctors feared that his brain had already become irreparably damaged.

Joe Restic, Harvard football head coach from 1971 to 1993, says he remembers Puopolo as being extremely coachable and a hard worker. He calls the incident “one of the saddest things that ever happened to me at Harvard.”

Lincoln, who was also stabbed, says the incident is “forever etched in my psyche.”

“I’ve remembered Andrew in my prayers every day since then,” Restic says.

Puopolo’s murder was closely followed by the Boston Globe, and even gained national attention. But its impact was felt most directly on Harvard’s campus.

“It was an event that pierced the protective bubble that everyone thought existed around all of us whether on campus or in Cambridge or Boston,” says Richard Weisman ’78, who reported the story for The Crimson. “It wasn’t something that was meant to happen to Harvard undergraduates.”

“I redoubled my effort to review events of that kind,” Epps says. “I didn’t understand why one would go to the Combat Zone, but it had been a practice for some time.”

Weisman says the College had no need to increase its oversight.

“Frankly, the mere fact that it happened seemed to have enough of a chilling effect,” Weisman says.

Naturally, the incident was particularly tough on the football team.

“You couldn’t have blown the balloon up bigger and then burst it,” says Alphonse Ippolito `79. “There was a lot of denial. People felt bad about the tradition.”

Easterling, Soares and Allen—all of whom were black—were brought to court on murder charges. Epps says racial tensions ran high.

Several Harvard students and Epps testified in the trial and, in March of 1977, Easterling, Soares, and Allen were convicted of first-degree murder and sentenced to life in prison.

The verdicts, however, would not hold.

Lawyers for the three appealed the convictions, arguing that the prosecution had violated the Commonwealth constitution by using its priviledge of preemptory challenge to prevent men and women from serving on the jury solely on the basis of race.

The prosecutor had rejected 12 of 13, or 92 percent, of the black jurors whom the trial judge found fit to serve. By contrast, he eliminated only 34 percent of white jurors on challenges.

In 1979, the Massachusetts Supreme Judicial Court granted the three defendants a new trial, a decision that was eventually upheld by the United States Supreme Court.

Many who followed the case were outraged that its defendants were awarded a new trial.

Joe Kross `79, one of Puopolo’s teammates, said at the time, “Andy never had a second chance.”

Easterling was eventually convicted of manslaughter and given 18-20 years in the Massachusetts State Penitentiary at Walpole. The other men were found innocent.

Lincoln says about 10 years after the incident he ran into one of the men on a bus going to the airport.

Puopolo has not been forgotten within the Boston community.

There is a park in the North End named for him, a number of charity events have been held in his honor and scholarships have been established in his name at both the Boston Latin school and Harvard.

Every year Harvard football alums play a game of touch football against Yale and then donate money to his scholarships.

—Staff writer Zachary R. Heineman can be reached at heineman@fas.harvard.edu.