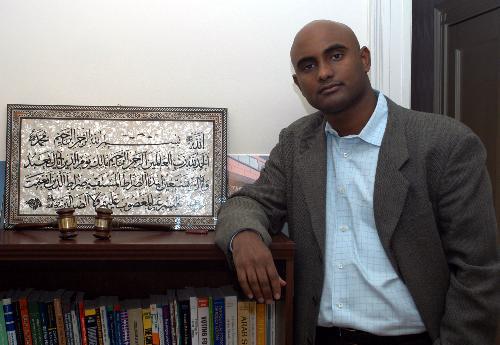 Ahmed T. el-Gaili ’98 returned to Cambridge this January to finish his studies at the Law School. When he was unable to get his visa in time to start classes in September, he took classes at a London law school.
By Nathan J. Heller, Crimson Staff Writer

Clutching a plastic carton of unfinished Greenhouse salad in one hand, a well-dressed student pulls a gray scarf around his collar and emerges from the Science Center into a stream of his peers.

His breath becomes mist in the chilling breeze as he heads toward the Law School quad for class on a recent afternoon.

But he expected his final year at Harvard Law School (HLS) to begin in the lush late summer—not under the bare branches of winter. And when he graduates this spring, el-Gaili will not take a job with a prestigious New York law firm as he had once planned. He’s moving to London instead.

Visa restrictions established in the wake of the Sept. 11 terrorist attacks prevented el-Gaili, a native of Sudan who has lived in the United States for almost 10 years, from returning to Harvard in the fall.

Like hundreds of others planning to begin class at universities nationwide, including more than a dozen Harvard students, el-Gaili watched the days of September pass as he waited for the U.S. government’s stamp in his passport.

“Visa became a four-letter word for me,” he says, recounting his experience and echoing the sentiments of students who endured similar trials.

El-Gaili has had better fortune than several other Harvard students, who weren’t able to come to Cambridge at all this year.

Administrators fear that such long visa delays could keep international students from freely attending college in the U.S.—potentially changing the character of American research universities.

In el-Gaili’s case, the visa saga has ended. But he has permanently changed his life plans—and fears that other potential leaders from developing countries might veer away from the U.S. in the future.

As university administrators from across the country confront the issue, they, like el-Gaili, are concerned and perplexed—and fear that, at least in the short term, there is no easy solution for their international students.

Among the issues that Sept. 11 legislation has raised for the nation’s colleges and universities, dealing with the dilemmas of students like el-Gaili has become a top priority.

Representatives of the Association of American Universities (AAU)—a consortium of 62 research universities—wrestled with the visa issue at a meeting this month, according to Kevin Casey, Harvard’s director of federal and state relations.

The organization discussed possible systems for bringing scholars into the country as quickly as possible, such as one used by the National Science Foundation to expedite international travel.

But the outlook for fixing the problem in the short term is not good, Casey says.

“I think that things might actually get worse. There’s no new silver bullet on this issue,” Casey says. “We’re as frustrated as everyone else.”

El-Gaili’s frustrations peaked in September, as he frantically made arrangements to take classes at a London law school so that he could graduate from HLS on time.

When he finally received his visa stamp in mid-November, four months had passed from the time he submitted his application.

Before this year, getting a visa typically took him less than a week, el-Gaili says.

Now, having arrived at last in Cambridge to finish a Harvard career that began in 1994, el-Gaili recounts the extraordinary ordeal that began for him in the late summer.

El-Gaili first came to the United States in 1993 as a high-school senior at St. Philip’s Academy, Andover, and enrolled at Harvard the following year. He worked for two years as an analyst at Morgan Stanley following his graduation before entering HLS in 2000.

Even before the events of Sept. 11, visa applications were a constant presence in el-Gaili’s life: because Sudan is on the Department of State’s list of nations potentially sponsoring international terrorism, he was only eligible for six-month U.S. visas.

But last summer, the state department informed visa applicants that they might have to wait longer, perhaps three to four weeks, before receiving their visas.

When he submitted his visa application on July 23—three days after transferring from New York to the London office of his summer employer, the law firm Sullivan and Cromwell—el-Gaili assumed that he would receive his visa long before his planned return to Cambridge on Aug. 31.

But under the stipulations of the Enhanced Border Security and Visa Reform Act of 2002, state department regulations had changed since the last time el-Gaili had applied. Citizens over the age of 16 in Sudan and the six other nations designated as state sponsors of terrorism now had to complete additional forms and appear for an interview.

On Aug. 16, only 15 days before he planned to return to the U.S., el-Gaili received his passport back from the government—but instead of including a visa stamp that would let him enter the country, the consulate requested an interview first.

When el-Gaili signed up for the next available interview on Aug. 29, he assumed that he would be able to return to the U.S. two days later according to his original plans.

“I thought that was the end of it,” he says.

He passed the intervening week with his sister in Scotland and then returned to the U.S. embassy in London for his interview. There, he was told that because of the July legislation, his passport would have to be sent to Washington for a complete background check.

“I was utterly shocked,” el-Gaili says.

This new delay meant that he would not be able to return to Cambridge in time for the first classes of the new term.

“The officer was explaining that it was nothing personal, which I thought was ironic because it was turning my life upside down,” he says. “After wandering the streets of London for many hours, I tried to investigate which options I had.”

El-Gaili sent a long e-mail note detailing his visa problems to HLS Dean of Students Suzanne L. Richardson, who told him exactly what his options were.

He had three choices: defer his enrollment and graduate late; accept an enrollment extension until Sept. 30; or he could try to get HLS credit for classes taken in England under an existing “hardship-out” program for students who cannot return to campus due to extenuating circumstances.

Unsure of when he would be receiving his visa, el-Gaili decided to try to enroll in a local law school—a difficult prospect because the term would begin in a matter of days.

“I started e-mailing and calling law schools in London under urgent request, trying to get accommodated as a student,” he says. “Life wasn’t that much fun.”

Three Harvard professors sent letters on his behalf to colleagues at British law schools—which, he says, made it possible for him to get a last-minute admission to a London institution.

El-Gaili says he is grateful for the help he got from professors and the HLS administration.

But the University should have lobbied harder for its stranded students, he says.

“I’m a little perplexed that a school with the political weight of Harvard could not do more for its exiled students,” he says.

But University officials say that, because el-Gaili’s experience and those of students like him, they are pushing for a solution. Since September, Harvard has been sharing information with other universities in an effort to catalogue the vast challenges that visa restrictions have imposed on its international community, according to Casey.

But finding an effective answer will be difficult, he says.

“It’s very high on our agenda, but it’s something that’s going to take time and a lot of effort,” he says.

Africa and Back Again

With a last-minute application and help from one of his professor’s acquaintances, el-Gaili secured a spot at the School of Oriental and African Studies (SOAS) at the University of London.

While still hoping his U.S. visa would arrive in time for the extended Harvard deadline of Sept. 30, el-Gaili enrolled at London University.

He had received his British visa while working for Sullivan and Cromwell, but he would need a different, student-class visa if he were to study in London.

This, too, proved a challenge.

The British Home Office told him that he could only get a student visa at a British embassy outside the country.

“It was getting comical at that point,” he says.

So after nine years of living in the United States, he returned for a week to Sudan to obtain a British visa.

Though el-Gaili spent most of the week at the British embassy, he found time to meet with his Sudanese family and friends again.

Although many were sympathetic to his trying experiences, some suggested that trusting the United States too blindly had made him responsible for his situation.

“To them, I’m very pro-American and too liberal for most Sudanese,” he says, explaining that many of the country’s residents are slightly wary of the U.S. in general.

El-Gaili returned to Britain with his visa and—living out of a hotel—began classes in London.

He deluged the U.S. consulate with a frenzied stream of correspondence as Sept. 30 approached.

By Sept. 29, el-Gaili realized that he would not be returning to Harvard for the first term of his final year. When HLS administrators says that he could gain credit for his studies at SOAS, he moved into a more permanent London residence.

In a letter postmarked Oct. 17, the U.S. consulate announced that it was ready to issue him his visa. On Nov. 19, he finally received his stamped passport.

He promptly sent an e-mail with the subject line “Saga Ends!” to his friends in Cambridge, happily announcing that he would return almost in time for the Harvard-Yale game.

El-Gaili says he’s glad to be back in the country that has been his home for nine years.

But, not wanting to face the ordeal of renewing his U.S. visa again, he has decided to work in London after graduation.

“It’s just professionally and personally difficult to live with these restrictive regulations and the humiliation of having to get fingerprinted at each entry and exit,” he says.

And while el-Gaili does not know precisely where his career will lead him, he feels now, more than ever, that he will eventually return to Sudan in a professional capacity.

“These have always been my long-term plans,” he says, “more so now that I have fewer choices.”

If other highly educated and motivated students—students who, in spite of their accomplishments, are inconvenienced simply because of their national origins—decide not to remain in the U.S. because of similar trouble in acquiring visas, he says, the nation could suffer as a whole, inducing its own “brain drain.”

The U.S. also risks spurning its potential allies by rendering itself so inaccessible to the most promising scholars and leaders of certain nations, he says.

“The people who come here typically like this country,” el-Gaili says. “These are the people who, upon their return to their home counties, become forces of liberal change.”