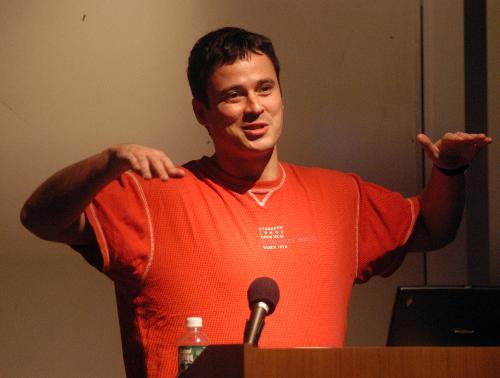 JOAO MAGUEIJO, professor of physics at Imperial College, London, discusses his idea that the speed of light is not constant in a talk at the Sackler museum yesterday.
By Alexandra N. Atiya, Crimson Staff Writer

But João Magueijo is not most physicists.

The young Professor of Physics at Imperial College, London—who spoke last night to a group of about 50 locals and self-proclaimed “physics junkies” in the basement of the Sackler Musuem—has set out to change the field.

In the interest of pursuing what he calls Einstein’s “dying dream”—a unified theory which encompasses both quantum mechanics and relativity—the Cambridge-educated theoretical physicist has dismissed the constant speed of light as a misconception.

Instead, he proposes a new idea: varying speeds of light (VSL).

“The essential problem is that the universe displays a unity it has no right to have,” Magueijo said. “We’d like to explain this somehow with a physical theory.”

The theory which Maguejio proposes speculates that light moves at different speeds at different times—and idea which he says hit him in the midst of a fierce hangover one morning in college.

The VSL framework solves three important problems that were left unanswered by Einstein’s theory, but the scientific community is not yet convinced of its viability.

Magueijo himself recognizes several problems with the theory, which he briefly addressed in the question and answer session.

Though he has garnered much publicity for his ideas, Magueijo said that it has not significantly affected his career for better or worse. In fact, he said he initially found his academic peers lukewarm to his ideas.

The public is generally unreceptive to his theory because Einstein’s theory is ingrained in the establishment, he said.

“It’s become the grammar of physics. That why we are sometimes called the anarchists of physics. Someone even once called us the ‘Sex Pistols’ of physics.”

Calling Einstein his boyhood idol, Magueijo said that he and his close colleagues are in fact further developing Einstein’s project—correcting him on this point.

“This is certainly not taking shots at Einstein. On the contrary, this is a continuation of his work. What he was looking for was a grand unified theory,” he said.

Currently, he said, the trend in the United States has been to propose an inflationist theory, one which explains quantum mechanics within the framework of relativity. Working across the Atlantic, Magueijo proposed a change.

“We don’t know how good a theory is until it has a competitor,” he said. “The big advantage [to VSL theory] is that you always have a rigid variation in the speed of light nowadays.”

The Portuguese physicist spoke last night to promote his new book, Faster than the Speed of Light: The Story of A Scientific Speculation—one which he hopes will give both scholars and non-academics new insight into his theories.

His ideas have made the 34-year-old somewhat of a popular figure.

Even though his speculations have yet to be proven or disproven conclusively, he has appeared in many articles, on television and he is currently on a three-week book tour in the U.S. and the United Kingdom.

Though he was well-received last night, garnering laughs with his frequent sharp jokes, many were not entirely convinced that his speech was accurate.

“Obviously, it was aimed a level to be popular,” said Stanley Fay, a professor of Calculus at Mass Bay Community College. “Consequently it did not have any proof.”