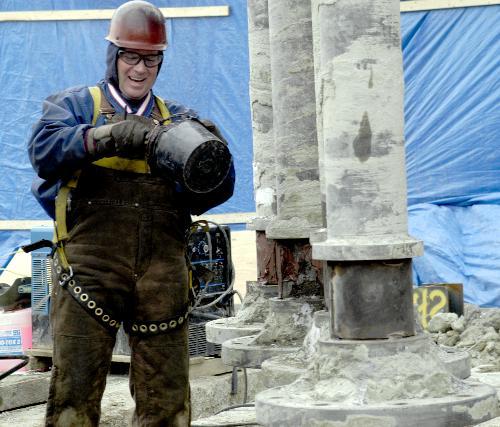 A construction worker prepares to drill at the site of the proposed Center for Government and International Studies (CGIS). Harvard gave up on building an underground tunnel to CGIS this week after a year of heated negotiations.
By Alexandra N. Atiya and Jessica R. Rubin-wills, Crimson Staff Writerss

After nearly a full year of negotiations, Harvard has given up its fight to dig a tunnel beneath a city street, telling neighbors in a letter that the city’s demands put a ten-million dollar price tag on a “project assessed at less than $280,000” and were not “within reason.”

The tunnel would have connected the two buildings of the Center for Government and International Studies (CGIS), the future headquarters for the government department and a dozen related centers.

Over the past half-dozen years, Harvard representatives have spent hundreds of hours negotiating with neighborhood activists, bargaining with Cambridge City Councillors, and even circulating a petition using the e-mail address tunnel@fas.harvard.edu.

But in this week’s letter, Harvard’s lead negotiator said that the City Council’s terms—which essentially doubled the cost of Harvard’s final offer—were infeasible.

“This doesn’t seem to me to be within reason, so with regret, I have written to the Council to inform them that we will move forward without the tunnel,” wrote Alan J. Stone, Vice President for Government, Community and Public Affairs in a letter to neighbors dated Jan. 28, 2003.

“As demolition is already underway for the North building, and as our faculty and students have waited nearly seven years for this important new center, it is time to move on,” Stone added.

Harvard’s decision to end the year-long tunnel fight marks the culmination of six years of tumultuous negotiations for the CGIS, involving University officials and community activists from the Mid-Cambridge Neighborhood Association (MCNA).

Harvard’s final offer included a million-dollar parcel of land designated for a park, $300,000 for neighborhood projects, and a five-year moratorium on local building—concessions which administrators estimated came with a $5-million price tag.

But the council’s response doubled each of those terms, and after dozens of hours of phone calls in recent months, Harvard’s negotiators at last gave up.

To the community, the tunnel was a luxury for Harvard which would cause 20 months of traffic jams, noise and air pollution during construction. Some activists even went so far as to call the proposed site of construction another “ground zero.”

But professors and administrators, who fought for the tunnel until the bitter end, said they considered it the lynchpin of the new CGIS facility, providing an essential link between related offices in the two buildings and connecting food services to the lecture halls and seminar rooms.

“I’m obviously very disappointed because it seems to me an irrational decision by the council,” said Roderick MacFarquhar, chair of the government department and one of tunnel’s most ardent supporters.

MacFarquhar added that although he didn’t regret his time-consuming advocacy work for the tunnel—including going to city meetings and leading the charge on the tunnel@fas petition—he was happy that the fight was finally over.

“Of course I’m glad I made every effort to try and sway the council,” MacFarquhar said, adding that, even without the tunnel, he’s relieved that plans for his department’s new home are finally settled.

Since Harvard had received every other required permit for the CGIS before it tried to clear the final hurdle—the council’s approval to dig under Cambridge Street—construction for the Faculty’s most pressing building project can now go ahead unhindered.

The tunnel’s absence will perhaps most affect the Weatherhead Center for International Affairs, which will be split between the two CGIS buildings.

“It certainly is going have an impact on our operations,” said Jim Cooney, executive director of the Weatherhead Center. “The lack of a tunnel just means it’s going to be that much less smooth and there’s going to be a lot more going across the streets.”

For their part, city councillors and local activists were hardly celebrating the death of the tunnel last night.

Although many were pleased that Cambridge Street will remain tunnel-free, they also expressed dismay that even lengthy, face-to-face negotiations could not produce a mutually satisfactory solution for Harvard and the neighborhood.

To them, it represents another blow to the already tenuous relationship between the University and the city.

“The hope was to develop a process and mechanism by which better agreeements and understanding could be reached between the University and the community,” said Cambridge Mayor Michael A. Sullivan, one of the city’s main negotiators. “The sad piece of it was that the the process fell apart.”

Neighborhood activists also expressed frustration that the process broke down.

“We got into a bad situation and we tried to come up with a way to improve it with the negotiations,” said John R. Pitkin, the neighborhood activist who led the charge against the tunnel. “It didn’t work.”

Former Dean of the Faculty Jeremy R. Knowles, who had made the tunnel one of his pet projects, said the neighborhood residents would lose out in the end because they would not receive the benefits Harvard had been willing to offer them in return.

“Sometimes the phrase ‘cutting off one’s nose to spite one’s face’ has a sadly clear meaning,” Knowles wrote in an e-mail. “One can only be sad that a few intemperate residents will have blocked such a valuable improvement of their neighborhood.”

—Staff writer Jessica R. Rubin-Wills can be reached at rubinwil@fas.harvard.edu