Romney Sworn In As Mass. Governor 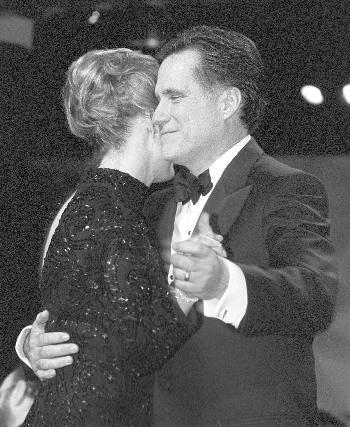 New Mass. Gov. W. MITT ROMNEY shares the first dance at his inauguration party with his wife ANN.
By The CRIMSON Staff

BOSTON—With his hand on a Bible originally used by his father as governor of Michigan, W. Mitt Romney was sworn in Thursday as the 70th governor of Massachusetts, pledging to end a culture of political patronage on Beacon Hill.

Before a joint session of the legislature gathered in the House chamber, he delivered a 15-minute inaugural address that shied away from specific policy proposals and focused on his plans to fashion a “lighter, more agile bureaucracy.”

Romney, who succeeds Jane M. Swift, continues more than a decade of Republican control over the Corner Office in a State House otherwise overflowing with Democrats. In fact it was two Democrats, Senate President Robert E. Travaglini and House Speaker Thomas M. Finneran, who administered the oath of office to Romney and Lt. Governor Kerry Murphy Healy ’82 before a backdrop of other state-wide elected officials, also all Democrats.

Romney, who graduated from Harvard Business School in 1974, drew heavily on his private-sector experience in his speech, stressing the need for “a greater level of responsiveness to our citizens.”

“To survive, the largest corporations adopt the qualities that characterize their most nimble and inventive attackers,” he said. “It’s not terminal to be large. It is only terminal to be slow, unresponsive, arrogant, isolated, bureaucratic or unwilling to change. These are the same dynamics that we confront in the public sector.”

Romney also offered an unusual analogy, comparing the need for agility and responsiveness in state government to the attacks of Sept. 11.

“Massive battle groups and warheads capable of destroying the entire planet were frustrated by a handful of murderous fanatics with box cutters,” he said. “The large, slow, impregnable force gave way to the nimble, stealthy and inventive.”

He highlighted his intention to empower ordinary citizens; accordingly, the State House was decorated for the day with thousands of photographs of Bay State residents in an exhibit called “Faces of Our Future.”

The incoming administration focused on common folks throughout the three-day inaugural festivities. Romney and Healy joined community members at a prayer service at New Covenant Christian Church in Mattapan on the night before they were sworn in. They began Inauguration Day by serving food at the New England Shelter for Homeless Veterans. And the next day, their first in office, they spent reading to elementary school students in Springfield.

The final price tag for the inaugural celebrations was the highest in the history of the Commonwealth—$750,000—but for the first time all events, including the $40-per-plate gala, were entirely funded by donations from supporters and corporate sponsors. The decision to refuse public funds for the ceremonies came on the heels of Romney and Healy’s pledge to forgo their salaries for the duration of their terms.

The governor’s gala featured several ethnic performance groups as well as the Boston Pops, which played the 2002 Olympic Theme song “Call of the Champions” in honor of Romney, who chaired the Salt Lake City Olympic Organizing Committee.

In another nod to his father, Romney ended his evening the way his father did: by dancing with as many women as he could before the night was over, including one woman whom he said had danced with the elder Romney 40 years earlier.