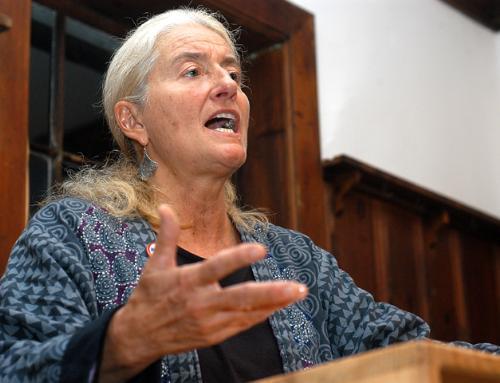 Director of the Bill of Rights Education Project NANCY U. MURRAY ’67 speaks at a meeting against the Patriot Act yesterday, which included a student discussion session.
By Nathan J. Heller, Crimson Staff Writer

The USA Patriot Act threatens the civil liberties of all students, particularly protesters and dissenters, an American Civil Liberties Union (ACLU) official told a group of about 30 undergraduates last night.

At a makeshift podium of two wooden crates, Nancy U. Murray ’67, who directs the ACLU’s Bill of Rights Education Project, said the Patriot Act enabled government agents to undertake extreme action without legitimate cause.

Her talk formed the centerpiece of an evening discussion of the Patriot Act and its implications sponsored by the Campaign for Campus Liberties, the Black Students Association and the Harvard Progressive Advocacy Group.

She told students that the recent legislation has extended the definition of domestic terrorism so as to equate some acts of basic protests with subversive activity.

“Our fear is that students and other members of the general public can be labeled terrorists if they engage in certain kinds of protest,” she said.

Citing what she called an “extreme example” of the Patriot Act’s effects within a university environment, Murray recounted 120 federal agents’ 4 a.m. raid on dormitories at the University of Idaho last winter to apprehend the president of the student Islamic society and round up 20 other international students on suspicion of subversive activity.

The apprehended student, she said, was an established member of the university community with a wife and child who could easily have been contacted for questioning through less extreme means.

Murray compared Attorney General John Ashcroft’s sensibilities to those of J. Edgar Hoover—but added that technology has made the pursuit of unreasonable search and seizures easier for Ashcroft than for his infamous predecessor.

“Today we have the technology of the film Minority Report and we have an attorney general who believes in pre-crime,” she said.

Although the government established the Patriot Act to counteract terrorist activity, Murray said the expanded powers it grants governmental officials have been used to investigate far pettier crimes, violating the rights of suspected criminals.

“Now, in the last month or so, we’ve learned that these expanded powers are being used against citizens and against criminals,” she said. “The law permits ordinary citizens to be locked up indefinitely, possibly for life, without due cause.”

Many of the legislation’s initial provisions will expire in December 2004, and Murray said she believes much of the Patriot Act will go unrenewed. The legislation is beginning to elicit strong criticism across governmental and partisan lines, she said.

“There is good news,” she said. “Not only is Congress waking up, people are waking up.”

But for civil rights activists like Murray, the job is far from done. Follow-up legislation dubbed the Patriot Act II is currently being drafted in Washington.

After Murray’s presentation, many of the students present joined in a discussion session to brainstorm courses of action to spread information about the Patriot Act.

Youth activists from the ACLU have declared the week of Oct. 26 “National Week of Student Action to Oppose the Patriot Act.”

Harvard student activists hope to help mobilize an effort to speak out against the Patriot Act at Harvard and other institutions, said Rachel S. Bolden-Kramer ’06.

The group also hopes to bring student concerns to the University’s administrative docket.

“We hope to get the administration to recognize that the Patriot Act is dangerous for students,” she said.

Scott F. Goldman ’04, a member of the Harvard Progressive Advocacy Group, said he attended the meeting to learn about the Patriot Act because of his interest in student rights and because he is considering a career with a governmental agency. He said that, coming to the meeting without strong views on the Patriot Act, he left opposed to some of its provisions.

“What’s clear to me now is that there are parts of the Patriot Act that I think are excessive,” he said.