Crimson Defense Takes a Trip Back in Time 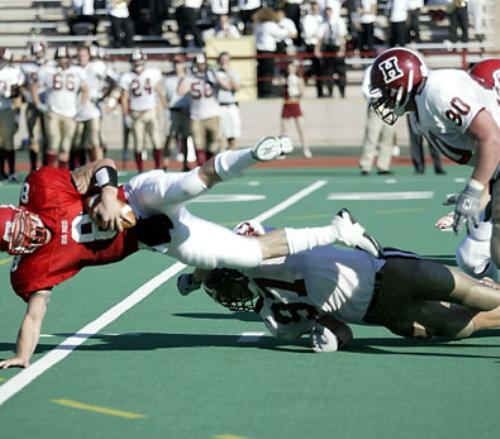 Sophomore defensive end ERIK GRIMM (97) registers his fourth sack of the season Saturday. The Crimson recorded six sacks on the day and leads the Ivy League with 23.
NO WRITER ATTRIBUTED

ITHACA, N.Y.—It was a rainy Saturday at Manhattan Field in Ithaca, N.Y., but Harvard fought through the muddy conditions to forge a 34-0 victory.

One hundred and ten years later, halfback Charles Brewer, class of 1896, and his three-touchdown performance have been long forgotten. The 1893 team—which posted seven shutouts in 10 games and only allowed 15 points all season—has faded beyond memory, falling victim to the darkness of time.

The 27-0 victory for the Crimson on Saturday revived the memories of that 1893 team, if only for a fleeting moment. It was that Harvard team which was the last to depart from Ithaca without surrendering a point.

In the Nov. 4, 1893 meeting, the Big Red only managed to cross onto the Crimson side of the field once. The Cornell flying wedge was held in check for the entire game as Harvard contained every Big Red run, save a 30-yard dash in the first half.

Last Saturday’s shutout was just as impressive—for a different reason, though. Cornell was able to move the football and penetrate deep into the Crimson’s half. But every time it did, the stalwart Harvard defense found a way to thwart the Big Red charge.

The last four Cornell drives of the first half all terminated in Crimson territory. The results were a fumble, a punt and two turnovers on downs.

In the second half it was more of the same, as the Big Red turned the ball over on the Harvard half of the field on downs and by way of an interception. Six chances, no points, two different sets of analyses.

“I have no answers,” Cornell coach Tim Pendergast said. “When you’re not able to finish or execute, there’s no miracle, no magic wand that a coach has to use.”

While the Big Red cited its inability to convert, Harvard celebrated its own big-time stops.

“Our defense was very opportunistic,” said Harvard coach Tim Murphy. “Every time you get turnovers you can change the course of the game.”

The biggest stop of the game for the Crimson came with under a minute remaining in the first half. Trailing 20-0, Cornell drove 31 yards to the Harvard seven. Faced with a second-and-three, Big Red tailback Andre Hardaway was stopped after a gain of two by Crimson seniors defensive tackle Jon Berrier and cornerback Benny Butler.

After a measurement, Cornell faced third-and-one from just inside the five. A plunge by Big Red fullback Todd Newell was stymied at the line, and another measurement showed Cornell to be inches short.

The Big Red opted against kicking the field goal and instead ran Hardaway to the left hoping to pick up the first down and the momentum. He was met very quickly by Harvard senior safety Chris Raftery and Butler and dropped for no gain.

“We had just driven the ball [almost] 40 yards and the majority of the damage was on the ground,” Pendergast said. “I felt like we had two chances to get a yard and I really felt like we could do it. But when we came up short maybe it let a little air out.”

Cornell charged down the field in the middle of the third quarter, driving to the Crimson 31. On third-and-seven, Big Red quarterback Mick Razzano put far too much air under a pass and Raftery was able to jump the out route and end the threat.

By the middle of the fourth quarter, it appeared that Harvard’s luck had run out. Razzano led Cornell from its own 16 to the Crimson five. Razzano looked for his favorite target—wideout Carlos Hill—on first, second and third-and-goal, but could only complete one attempt, which went for a loss of three yards. On fourth-and-goal from the eight, Razzano rolled right but could not evade Harvard sophomore defensive end Erik Grimm, who sacked him for an 11-yard loss.

The sack put the exclamation point on what had been an amazing defensive performance—one that left Pendergast bewildered.

“I felt that there were some times when Harvard was trying to open the door for us and we just didn’t charge through the door,” Pendergast said.

For a simpler philosophy, just turn to the Harvard defense.

“Your goal in every game is to not let their offense score,” Harvard captain and linebacker Dante Balestracci said. “When you see that goose egg on the board, you try to preserve it.”

—Staff writer Michael R. James can be reached at mrjames@fas.harvard.edu.