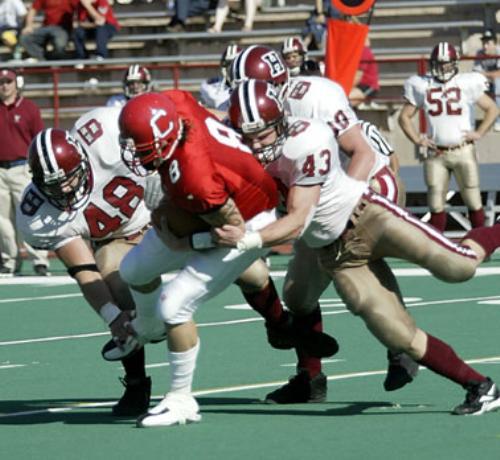 ITHACA, N.Y.—By the time Cornell took possession of the ball for the third time Saturday afternoon with 3:49 remaining in the first quarter, the Harvard football team—which entered the game ranked No. 23—had already posted nine more points than the Big Red had total yards.

The Crimson (4-0, 2-0 Ivy) defensive unit dictated the game’s tone from the first snap, limiting Cornell (1-3, 0-2) to fewer than three yards per play and allowing the Big Red inside the 20-yard line just twice en route to a cushy 27-0 victory, Harvard’s first shutout in Ithaca in 110 years.

Under the yoke of a stifling Crimson rush headed by junior linebacker Bobby Everett and his one-and-a-half sacks, Cornell managed just four yards of total offense and no first downs on its first two possessions of the game.

That clutch defending was put to its greatest test as the first half wound down, with the Big Red driving inside the Harvard five-yard line with under a minute left.

After taking possession on the Crimson 38 with 4:09 remaining, Cornell pounded the ball into a drained defensive line, rushing on six consecutive downs—highlighted by four rushes by tailback Andre Hardaway that netted 20 yards—to advance inside the Harvard 15.

A short pass and another Hardaway rush set up third-and-one on the five-yard line with the clock slowly ticking away. McBurney stuffed fullback Todd Newell’s push towards the marker, setting up fourth-and-inches with half a minute to go. Once again the call was for Hardaway, but this time the Crimson defense was ready.

The defensive line rebuffed the Big Red line’s push while senior cornerback Benny Butler—who led both teams with 12 tackles and was named the Ivy League Defensive Player of the Week—and senior free safety Chris Raftery maneuvered through the line to plant Hardaway inches from the spot, securing a 20-0 Harvard lead at the half.

“If they had scored at halftime, [it’s a] completely different game,” captain and linebacker Dante Balestracci said.

But with the defense surrendering just 138 yards of offense and no points in the first half, the lead junior quarterback Ryan Fitzpatrick and his unit had established 39 seconds into the second quarter held up.

“We came out and really dominated the line of scrimmage,” Murphy said. “We kind of cruised to an easy 13-0, 20-0 [lead]. Any time you can do that with our defense, I’ll take that.”

With the defense forcing punts on each of Cornell’s first two possessions and the fumble on the third, the Crimson offense’s average starting point after the Big Red’s first three possessions was its own 40-yard line. But the second offensive possession was drastically different than most of Murphy’s explosive passing sets.

Despite injuries to five of its top eight offensive linemen, Harvard began a 62-yard march downfield with 11:39 remaining in the first quarter that was highlighted not by crisp passes from Fitzpatrick but by sharp runs by freshman tailback Clifton Dawson. The rookie gained 31 yards on five carries on the drive, including a 16-yard burst on a delayed rush out of the shotgun that set up the opening tally. Sophomore Ryan Tyler caught a pass along the left sideline for a six-yard gain and on the next play punched the ball in from the five to put the Crimson up 6-0 following senior kicker Adam Kingston’s botched extra-point try.

The next trip downfield, the offense returned to its normal form with Fitzpatrick scrambling for 56 of the 73 yards. The junior signal caller broke from behind the line on the second play of the series, bursting through an open hole and scampering into the end zone ahead of Big Red defenders for a 73-yard score. The TD was negated, however, by an illegal block in the back that reduced Fitzpatrick’s advance from 73 to 38 yards.

Unfazed, Fitzpatrick quickly regained the yards lost, driving to the 10-yard line and rolling out left as he looked for an open man in the end zone. Seeing none, he dashed back all the way across the field, turning towards the goal line at the right hash mark and diving in for the score to put Harvard ahead by 13.

The Crimson made it three straight touchdown drives with a five-yard toss from Fitzpatrick to junior wide receiver Brian Edwards less than a minute into the second quarter, raising the score to 20-0. Edwards proved untouchable on the drive, taking a reverse from Tyler 18 yards while snaring two catches for 21.

But with 14 minutes remaining in the first half, Murphy put the leash back on Fitzpatrick and his offense, rushing on five of seven plays to close out the half and throwing only on third down.

“We were a little more conservative in the second and third quarter,” Fitzpatrick said. “We tried to pound. A lot of credit to them—they did a great job, stopped our running game a lot.”

After accumulating 184 yards of offense in the first quarter, the Crimson managed just 191 in the final three frames, 64 of which came on a third-quarter touchdown pass from Fitzpatrick to freshman wide receiver Corey Mazza—who was named Ivy League Rookie of the Week yesterday—that established a 27-point lead.

Fitzpatrick finished just 12-for-17 for 165 yards, two scores and one interception, his fourth in as many games.

With the offense grinding the clock down and scoring just seven second-half points, the pressure on the defense began to mount as Cornell attempted its late game push. But the Harvard defense was equal to the challenge, surrendering just seven rushing yards and 109 yards of total offense in the second half.

At the defense’s most vulnerable moment, Razzano attempted to cap a 28-yard drive with a trip to the end zone, lofting a pass to wide receiver John Kellner, who was streaking diagonally across the field towards the left sideline a step ahead of Raftery. But Razzano’s pass floated in the air for two seconds too long, and Raftery stepped across Kellner for the interception—Razzano’s first of two for the day—to solidify the victory.

“Our defense was very opportunistic,” Harvard coach Tim Murphy said. “Every time you get turnovers you can change the course of the game.”