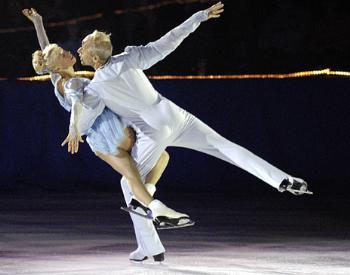 The Bright Hockey Arena is used to big crowds of exuberant fans, but this weekend world class figure skaters brought an unfamiliar measure of sparkle and style to the venue in the 34th annual Evening With Champions.

Skaters, including 1994 Olympic gold medalist Oksana Baiul and 1992 Olympic silver medalist Paul Wylie ’91, took to the ice for Friday and Saturday nights’ benefit performances. Proceeds will go towards care and research for children suffering from cancer.

Wylie, who was a resident of Eliot House—which organizes the annual event—hosted Evening With Champions for the tenth year.

“The Red Sox may have lost tonight,” he said in his speech to the audience. “But don’t worry, because we’ve got a spectacular show for you with champions of the past, present and future.”

Though the ice would be graced by top Olympic stars and rising local talent, Saturday night’s performance opened with 11-year-old cancer survivor Rebekkah Houde, who skated to music from Chicago.

The rest of the two-hour show was a parade of sequins and flashy costumes, featuring a range of performers that included nine-year-old local Diandra Burke and Oleg and Ludmilla Protopopov, who won Olympic gold medals in 1964 and 1968 and who have been skating together for over 50 years.

One of the night’s more popular acts was eight-time British Champion Steven Cousins, who came onto the rink in black leather pants, a tie-dyed shirt and sunglasses.

This was Cousins’ first performance at the event, and he skated to a catchy song from the movie Snatch.

“If I could do more I would,” he said. “Just to be around these amazing kids, seeing the joy in their faces and knowing we are raising money for something so needed and so well-deserved, it’s incredible.”

Wylie performed in the show for the first time in five years, skating to Enrique Iglesias’ “Hero.”

Baiul, who performed two routines in her third appearance at Evening With Champions, said she enjoyed performing the benefit.

“It’s always nice to give back for a good cause,” she said. “I’m grateful because others have helped me in the past, and I want to do the same for these children.”

Event co-chairs Kern Chen ’05 and Liane Young ’04 said in an e-mail that they believed the event reached its fundraising goal of $50,000, which will go to the Jimmy Fund at the Dana-Farber Cancer Institute.

Evening With Champions has raised over $2.2 million for cancer research and care since its creation by Harvard undergraduates in 1970.

Chen and Young said that many students and sponsors approached them saying that this weekend’s performances were the best they had seen in years.

And Young, who said she transferred from Lowell House to Eliot in order to be more involved in the event, said that the money raised at this year’s exhibition will “significantly exceed the numbers from last year.”

The two co-chairs said they spent 30-40 hours a week working on the event this summer. As for this fall, “It’s really been eating, sleeping, breathing [Evening With Champions],” Young said.

In addition to the two performances, there was also a party for all of the Jimmy Fund children, which included refreshments, entertainment and arts and crafts.

“All the skaters are invited, and we were delighted that both Oksana Baiul and Paul Wylie attended the party,” Chen said. “The skaters also took a tour of the Jimmy Fund Clinic after five hours of rehearsal on Friday, and we appreciate their dedication.”

After the event, Young said that cancer survivor Houde’s opening performance was one of the things that made all of the time and energy worthwhile.

“I don’t know whether she knows how much of an inspiration she was to us and to all the other Jimmy Fund children who came to see her skate Saturday night,” Young said.