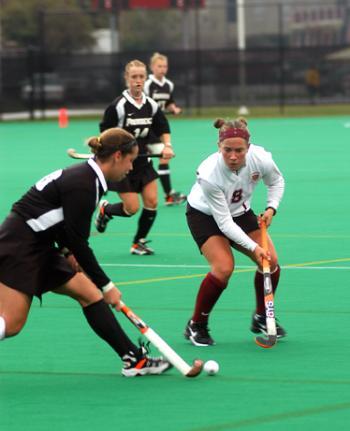 The Harvard football team wasn’t the only squad to shut out a Cornell foe this weekend.

“It was important mentally that we play our game and come out with a big win, for team morale,” McDavitt said.

The Huskies’ triumph on Wednesday had snapped the Crimson’s four-game win streak, making this victory on the road on Sunday all the more crucial.

“It was really important to get the full, complete game going,” tri-captain back Jen Ahn said. “Everyone got good playing time, which is key after a tough loss. We need the momentum especially as we head into the end of our season and into Ivy play.”

McDavitt scored her fourth and fifth goals of the season, while senior midfielder Liz Andrews netted her team-leading seventh goal of the year.

“We’ve scored a good amount and it hasn’t just been one scorer,” Ahn said. “The other team hasn’t been able to just decide to shut one person down. The goals are being spread out well.”

Most demonstrative of the strength of the entire effort may be the fact that the Crimson outshot Cornell 30-2.

“This year, everyone’s been stepping up and taking advantage of their opportunities,” Kate McDavitt said. “We’ve been making them count when we need them the most. It’s been nice to see everyone contribute instead of the usual few, and I think that’s a product of the emphasis we’ve placed on teamwork. Everyone’s picking it up this year.”

On the defensive side, Harvard needed just two saves—one by Zacarian and one by Remtilla—to complete the shutout. The blanking was the Crimson’s third in its past five games.

Dating back to its Sept. 24 win over then-No. 11 Connecticut, Harvard has outscored its opponents 24-5. On Sunday, two shots and one penalty corner were all a stingy Crimson team conceded.

“After the momentum began building on our side, we just started dominating,” Kate McDavitt said. “It became really easy to keep it on our end and keep attacking, keep attacking. By the end of the game, we felt we had broken the defense down, making it easier for us to keep going.”

On Saturday, Harvard heads to New Haven, Conn., to try and defend its unblemished conference record against Yale.