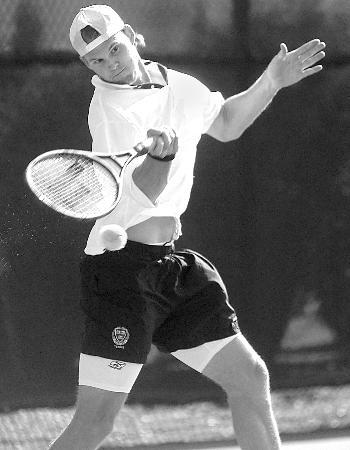 The men’s tennis team competed at the ITA All-American Championship in Chattanooga, Tenn. this weekend.
By Alex Mcphillips, Contributing Writer

The season is young, but after the Harvard men’s tennis team competed in the first of three 2003-04 national championships, its added muscle already appears to be paying off.

Three Crimson players—co-captain and No. 88 David Lingman, senior Mark Riddell and junior No. 60 Jonathan Chu—played in the ITA All-American Championship held this weekend at the Champions Club in Chattanooga, Tenn.

Lingman, whose rigorous off-season training with jump ropes, plyometrics drills and weight lifting helped him increase his quickness while gaining five pounds of muscle mass, provided Harvard’s biggest upset of the weekend by defeating No. 14 Robert Searle of Rice in the first round in straight sets, 6-4, 6-3.

Lingman also teamed with Riddell in the 32-team doubles tournament, crashing the party with two upsets of top-30 teams.

After losing 8-6 in the first round to Ludovic Walter and Jason Zimmerman of Duke, the Lingman-Riddell team, ranked No. 34 nationally, played well in the backdraw matches, reaching the semifinals.

First, they dispatched Illinois’ No. 16 Michael Calkins-Conner Murnighan pair 8-4 in the backdraw round of sixteen before beating Georgia Tech’s No. 28 tandem of Jose Luis Muguruza and Scott Schnugg 8-2 to advance to the semifinals with little trouble.

In the backdraw semifinals, Lingman and Riddell were finally upended, losing to Ohio State’s Jeremy Wurtzman and Joey Atas.

Overall, it was a successful weekend for a Harvard team that is especially strong this year, according to Lingman.

“When the level on the team is really high, practices are good,” Lingman said. “And that helps everyone get better.”

Lingman, who worked with the same trainer that prominent American tennis players like Jim Courier and Michael Chang employed during their careers, trained extensively—jumping rope and doing water work, strength training and other cardiovascular work—to get in premier shape this summer.

Thus far, the results have clearly been positive. Including qualifying, Lingman finished the tournament with a 3-1 singles record to add to his great success in doubles.

“I was injured a lot more last year, just struggling to get through matches,” Lingman said. “This year it’s different.

“When you’re tired, you tend to make bad decisions. When I’m feeling better, I can play the way I want to.”

Lingman qualified on Wednesday by beating LSU’s Bryan Fisher in straight sets, 6-3, 6-2. There were six days of qualifiers leading up to the tournament, which began Thursday and ran until Sunday afternoon.

No Harvard player has won the singles tournament since current ATP star James Blake ’01 did so in 1998.