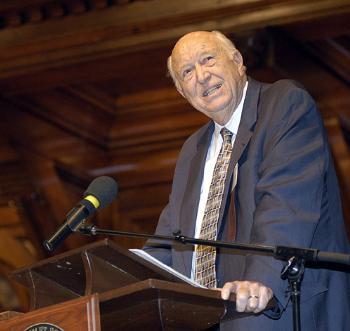 BILL GATES, SR. speaks at an induction ceremony for the American Academy of Arts and Sciences in Sanders Theatre on Saturday.
By Rachel B. Nearnberg, Contributing Writer

A professor of a popular core class and Pulitzer Prize-winning historian were inducted along with seven other Harvard professors into the American Academy of Arts and Sciences in Sanders Theater Saturday.

The academy, which dates back to the Revolutionary War era, honored the accomplishments of its 189 new fellows and 29 foreign honorary members in the humanities, sciences, law, medicine, business, and the arts. Members of the class of 2003 included four Nobel prize and four Pulitzer prize winners.

Phillips Professor of History Laurel T. Ulrich was honored at the ceremony for her contributions to colonial and women’s history. A winner of the Pulitzer Prize for her A Midwife’s Tale: The Life of Martha Ballard Based on her Diary, she commented on the diverse expertise of the inductees.

“I was rather amazed to be sitting in that group,” she said of the theater filled with scholars.

Sandel sat in the cramped Sanders seats where students usually hear him lecture in his popular “Justice” class.

Four members of the inductee class spoke at the ceremony and commented on the future of their respective fields.

Lawyer and philanthropist William H. Gates, Sr., father of the Microsoft founder, addressed his fellow inductees about the importance of retaining the Federal Estate Tax.

“One cannot help wonder at the thinking that argues to forfeit this huge revenue stream at a time when the nation is accepting an annual federal deficit in excess of $400 billion,” said Gates, who co-chairs the Bill and Melinda Gates Foundation. “The word ‘reckless’ comes to mind.”

University of California Professor Carolyn R. Bertozzi ’88, an expert on single-cell phenomena and cell surfaces, discussed the future of the intersection between biology and chemistry.

“Biology can be a frontier where technology is making the invisible, visible,” she said. She compared her study of cell surfaces to the study of the surface of the earth, and described applications of her research to cancer cells.

“We have a mandate in academia to work on issues that have global importance,” she said.

Internet pioneer and MIT Professor Tom Leighton commented on the challenges of the Internet while Michael Wood, chair of Princeton’s English department, spoke about insights to be gleaned from literature.

According to President Patricia M. Spacks, the academy’s goal is “to focus its rich intellectual resources on serving society.”

Former U.S. President John Adams, Harvard Class of 1755, founded the Academy, which has grown to a membership of over 4,500.