Senior Westfall tallies in second game in a row 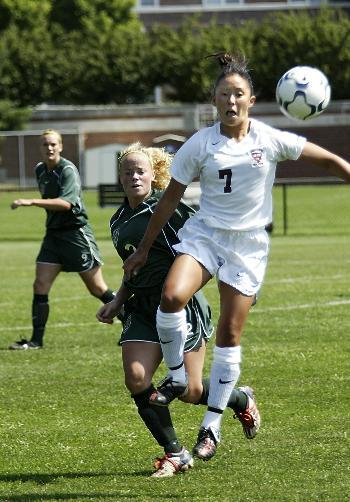 Senior striker ALISA SATO (7), shown here in a 3-1 Sept. 7 win over Vermont, asssisted on Harvard’s only goal at Cornell on Saturday.
By Jon Dienstag, Contributing Writer

The Harvard women’s soccer team could not hold off a late Cornell rally on Saturday, as the Big Red’s Ali Gombar scored the tying goal with 2:50 left in regulation, leading to an eventual 1-1 stalemate between the Ivy League foes.

Senior midfielder Katie Westfall had given the Crimson (4-3-4, 1-0-2 Ivy) the lead in the 70th minute after a combination from senior striker Alisa Sato and sophomore Sara Sedgwick.

“We tried to swing it wide and laid it to a forward and I was able to get a completely wide open shot from 12 yards out,” Westfall said.

But Gombar erased the lead by sneaking the ball into Harvard’s net.

“We pushed up but couldn’t adjust,” Westfall said. “A runner slipped behind the defense, and she chipped it over [Crimson sophomore goalkeeper Katie Shields’] head.”

Harvard started strong in the first half, launching 10 shots to only three from Cornell (6-2-2, 1-1-1), but the Crimson couldn’t convert on any of its scoring opportunities.

Harvard’s defense has been its strength throughout the season, while its offense has not been as potent. Managing just the lone goal forced the Crimson to rely on its defense yet again, and Harvard came up just short of holding onto the victory.

“We did have opportunities but we’ve got to put them in,” junior back Liza Barber said. “To get scored on in the last three minutes just shouldn’t happen.”

While both teams had chances to score the decisive goal in overtime, both Big Red goalkeeper Katrina Matlin and Shields turned away all threats. Matlin, under heavy pressure from the Crimson attack for most of the game, made nine saves while Shields stopped three Big Red shots.

“Katie [Shields] is a nightmare for other team’s forwards,” Westfall said. “The lucky breaks she gets are because she works so hard. We trust her back there.”

Even with Shields’ resiliency, the Cornell attackers did have one great opportunity in overtime when Emily Knight headed a ball into the net. Fortunately for Harvard, the goal was overturned due to an offsides call.

With the tie, the Crimson remains in the hunt for the Ivy League title and the automatic NCAA Tournament berth that comes with it.

“By tying, it still doesn’t ruin anything.” Barber said. “We still have six games to look forward to. It’s completely in our power. If we win these games we win the Ivy League and go to the NCAAs.”

Harvard hopes to chalk up an important nonconference victory when it heads to Worcester on Wednesday to take on Holy Cross.