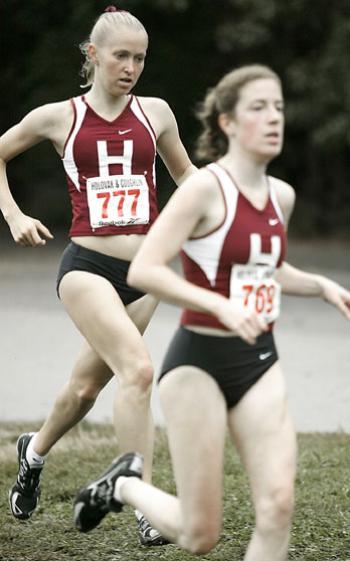 Despite resting a number of their top runners, the Harvard men’s and women’s cross country teams still impressed amidst the large field of competitors at the New England Cross Country Championship at Franklin Park.

The Crimson hopes to prove that its runners are underestimated in the eyes of Heptagonal competition, looking to play the role of underdog in two weeks time.

While many of the varsity runners rested this weekend in preparation for next week’s pre-nationals, the rest of the team held its own as Harvard, led by Barrett (25:26), finished 14th out of a 47-team field.

“Almost all of the guys ran 15-20 seconds faster than they did last week at our race against Yale, which we barely lost by one point,” Bienvenu said. “This shows that the younger guys are getting more comfortable with college cross-country, which is an 8K course instead of five.”

With this increasing success, especially among the freshmen, the team has seen obvious dividends from its intensive training over the last few months.

“We’ve been doing some heavy mileage as well as long tempo runs and some fast interval work, primarily repeat 1000’s,” said Bienvenu, describing the variety and intensity of the Crimson’s daily workouts.

The freshmen on the team reflect Bienvenu’s lead and motivation.

“You have to love this sport to put up with the grueling workouts,” said Barrett. “It’s our love of the sport and desire for excellence that makes us want to improve. We don’t want to let the other guys on the team down.”

Harvard has an overabundance of belief in itself and the Crimson runners have set their sights on victory at Heptagonals, where the Ivy League championship is decided. While Harvard fell by just one point to Yale last weekend, the team has turned this disappointing loss into a clear objective for Heptagonals.

According to Bienvenu, junior Alasdair McLean-Foreman will take aim at winning the race, with his teammates falling in behind him.

“But there will be some stiff competition this year,” Bienvenu said. “The team will be looking to runners, like freshman Sean Barrett, to fill out our top-five scorers. Right now we’re in a position to upset a number of teams in the league.”

Though other runners state it more definitively, they all have the same idea.

“Our one big goal for this year is to win the Heps Championship at the end of October,” said Barrett, who also discussed how his personal success has worked into this team dynamic. “Success as a freshman is all relative. It is foolhardy as a freshman to try to compare yourself to some of these real top runners.”

Next week the Crimson will take on powerhouses such as Stanford, Arkansas and Colorado as they run in the NCAA Pre-nationals. But it will also serve as the last time before Heptagonals to see where Harvard stands.

“Dartmouth, Princeton, and Yale,” pondered Bienvenu. “It’s a good chance to measure ourselves against some of the best teams in the nation, both individually and as a team.”

As with the men’s team, the Harvard women rested some of the varsity runners in preparation for next week.  Nevertheless, the team ran well and placed 16th in one of the larger fields of the year, competing against 40 other colleges.

“We were happy with our performance on Friday considering the huge field we were competing against,” senior Katherine Katz (19:26) said. “For us, New England’s provides more of a chance to improve individually, as we didn’t race our entire team.”

Aside from placing in the top 10, Whalen also impressed with a time that averaged 5:50 a mile, and was a mere 25 seconds from the first-place finisher, Aly Venti of Amherst.

For the Crimson, junior Lindsey Yourman was the only other runner in the top 100, placing 80th in a time of 19:13.

For the seniors on the team, this race was a little emotional as well, as it will be the last time they will race that distance for Harvard on their home course.

“It was the last opportunity for us to race a [five-kilometer race] on our home course this season and attempt to get some [personal records],” Katz said.

Their last race at Franklin Park will be on November 15th in the NCAA Regionals where top runners Whelan, captain Mairead O’Callaghan and sophomore Laura Maludzinski, both of whom sat out this weekend’s race, will look to qualify for Nationals.