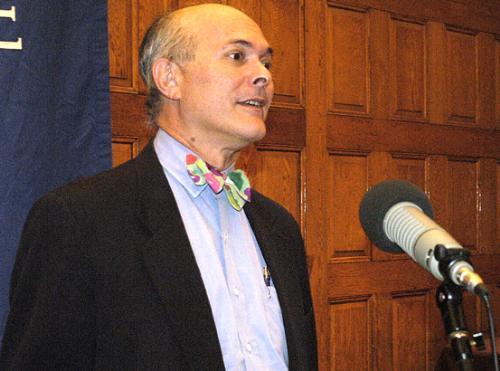 Paul Billings, chair of the Council for Responsible Genetics, tapes a segment for the Cambridge Forum.
By Leon Neyfakh, Contributing Writer

Undergraduates seeking an outlet for political debate and commentary from local intellectuals sometimes turn to the Cambridge Forum, a weekly public-radio discussion program based in Harvard Square now in its 37th season.

The Forum’s new season was launched in late September with a discussion led by political satirist Al Franken ’73. An unprecedented number of people attended the taping, which was held—like every edition of the Forum—at First Parish Unitarian Universalist on Church Street.

“That event really wiped us out, in terms of being beyond the capacity of our staff,” says Cambridge Forum director Pat Suhrcke. “It took a lot of planning, and there are only two half time staff members.” Despite the strain on the program, however, the massive turnout for the Franken seminar may be an indication of newfound political interest among the Cambridge community.

The 30-minute talk show, broadcast every Saturday at 7 a.m. on WRCA (1330 AM), serves as a medium for social and political discourse.

“I think the current administration, the events of Sept. 11, the Patriot Act and the war in Iraq have really given people pause,” Suhrcke says. “There’s a feeling of ‘need to know’—a feeling that this kind of discussion needs a home; it needs to be happening. Americans have a reputation for being blunderers, and we can’t afford to be blunderers anymore.”

As global issues like terrorism, international relations and technology continue to affect the American public more and more directly, their effects become less theoretical and more concrete in the eyes of U.S. citizens, according to Suhrcke.

“It certainly makes the mission much more urgent,” Suhrcke says. “It’s more compelling now. There was sort of a doldrum, I think, during the 80s when everyone was feeling good. People were comfortable and complacent.”

The Forum complements this increasing consciousness by booking expert guests from all disciplines and backgrounds. Upcoming speakers, for example, include Iraq expert Toby Dodge and Catherine Orenstein, a journalist and cultural critic who has written a book about the evolution of ethics and gender in fairy tales.

“Lots of our guests are academics—scholars who would usually speak to classrooms,” says Suhrcke. “But here they’re in a public forum, talking to members of the general public, trying to share the insights that their training and their expertise give them.”

Guests are allowed to speak for approximately 20 minutes, addressing their theses and providing listeners with background. The rest of the 90-minute taping is devoted to a moderated question and answer session. The recording is then edited down to 30 minutes and broadcast at a later date on at least 40 National Public Radio stations across the country.

“We promote civic dialogue, which is all too rare a commodity in this day and age,” says Suhrcke. “Resources and demands for space, money and personnel in the sciences and technology fields [have grown] by leaps and bounds. Humanities don’t need a lot, so they tend not to be taken seriously and not funded seriously across the board.”

The Forum’s dedication to the liberal arts and its aura of political activism reach thousands of seemingly like-minded listeners every week.

Suhrcke and Program Manager Jaime Paglia say they are working with two distinct audiences: those who attend the free public tapings at First Parish, and those who listen to the show from their homes when the edited version is broadcast.

Suhrcke says that Harvard students are always given a certain amount of special consideration when the show’s target audience and patronage are discussed.

“Sometimes, what we get in the audience are the students in someone’s class,” she says. “So when Paul Hoffman comes to talk about global warming, his students will come, so that they can earn some extra credit in his eyes and find out if he’s going to say something that they really ought to know for the exam on Friday. There certainly are speakers who appeal to students.”

The Forum has paid special attention to colleges ever since its beginning in 1967, Suhrcke says, when the Unitarian Universalist’s Association decided to launch a response to the teach-ins that many universities were conducting at the time.

“The Unitarian Universalists, who have always been a non-divine religion, started urging their congregations across the country to start public forums,” explains Suhrcke. “There were forums in a lot of Unitarian churches in the late 60s and early 70s, but [ours] has survived, just by virtue of it being in Cambridge and having access to so much expertise and so many visiting people coming through. We can maintain a weekly schedule of programs, which would be hard to do in Fargo.”

The Forum remained a Cambridge phenomenon for its first three seasons, inviting little-known expert guests to small, off-air discussion groups to increase awareness on a local level. In 1970, Bob Ferrante, currently the executive producer of NPR’s Morning Edition in Boston, discovered the sessions and asked to record them for radio. Most recently, the show has expanded onto the internet, offering many of its past shows in streaming RealAudio format for download.

Suhrcke’s plans for the show include forming tighter relationships with activist groups and political organizations, as well as exploring ways to use the web for interactive content.

“We’re not set up for activism, or for book discussion, or lobbying, or advocacy, or anything like that,” she says. “Lots of the speakers we have, and lots of the topics we deal with, call for that type of follow up. When you’re just talking, you always run the risk of just preaching to the choir.”