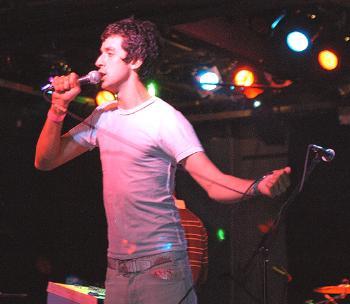 The French Kicks are nobodies.

You’ve probably never heard of them, and neither has America. They’ve been mentioned in passing in the same breath as the Strokes and the Libertines—occasionally. Pillars of the rock renaissance—kind of. An exciting new band—if you’re into that scene—raising hairs and eyebrows and taking the country by storm—if they can get away with it.

Lots of middling, in other words, from within the band and at them, as the people and the press sit on the fence and remain completely unoffended and unmoved. The French Kicks exist and that’s about it.

“I’m not surprised we’ve come this far,” says lead singer Nick Stumpf. “But I’d like to go further.” Their live performance, which Boston recently witnessed when the band opened for Hot Hot Heat at Axis, showed some promise of evolution but left much to be desired from the young, starstruck group.

“Artistically speaking I’m happier with the live show than I have been before,” Stumpf says. “We’re actually starting to sound like what I always hoped we would sound like. We’re getting there.”

Songs from their debut album One Time Bells were pleasant enough: a few catchy hooks here and there and marginally interesting arrangements. In other words, they were about as thrilling and inconsequential as the new Vertical Horizon record, mediocre in songwriting and texture and thoroughly unmemorable.

If the French Kicks have ambitions or big plans, they haven’t delivered on them yet. And given their current identity, it would take a complete reinvention for them to develop a remotely distinctive style.

“We try to do interesting things with guitars,” says Stumpf. “We don’t really give a shit about rock music. I never listen to it. I hate most of it. Standard guitar rock is probably my least favorite thing in the world. We write guitar-based songs...but that doesn’t mean that we’re a guitar rock band.”

Except they are—and the most standard of their kind, at that. Everything they hate about guitar rock, its stagnation, reliance on overused cliches and reluctance to invent, is all prevalent in their music. If Stumpf really does like R. Kelly and Jay-Z and Motown as much as he claims, then this much should be obvious to him.

Nonetheless, faith stands firm, as the world hasn’t yet abandoned the French Kicks—or decided that they’re not worth the wait.

Their next album had better be good, basically.

“There’s definitely some production things that we’ll do differently this time,” Stumpf says. “[Last time] we had this weird idea about making an understated record for some reason, but we’ve grown out of that. If the new songs weren’t better, I’d have to throw in the towel.”

The Kicks played two of them at Axis, and if they’re any indication, he’s not lying—the songwriting is improving, and the band seems to be writing more engaging melodies and tighter arrangements.

Their sound is indeed developing, even if it was somewhat hard to notice or care about after the overwhelming attitude, sweat, dirt and cocaine eyes of openers Ima Robot.

“The sound is sort of changing,” Stumpf says. “The material is changing, to the extent that I feel like we’re a new band.”

Unfortunately, the French Kicks who played Axis were indubitably the very same French Kicks who made One Time Bells. If they don’t do any more growing soon though, the Kicks’ll be getting the boot faster than you can say “au revoir.”