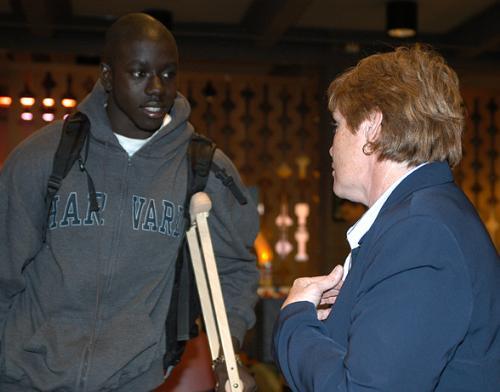 KWAME OWUSU-KESSE ’06 speaks with an FBI Special Agent, who would not release her name, during a job fair sponsored by the Black Men’s Forum in Loker Commons yesterday.
By Margaret W. Ho and Sara E. Polsky, Contributing Writerss

But the event—which attracted such organizations as the FBI and the CIA—sparked an unexpected discussion on the BMF e-mail list about the relationships between these institutions and minorities.

A few members of the group voiced concern that the CIA and FBI are organizations that have historically discriminated against blacks. Former BMF president Isaac J. Weiler ’02, a participant in the e-mail discussion, cited the FBI’s dealings with the Black Panthers during the 1960s as one example.

“There is no doubt in my mind that these organizations still perpetrate acts of injustice,” he said in an interview yesterday.

Other BMF members argued, however, that the only way to change this record is for minorities to become more involved with the FBI and the CIA.

“You can’t deny that these organizations have had a troubled history of discriminating. But you can say that about basically every institution that existed before 1950,” said current BMF President Brandon M. Terry ’05.

“If we’re going to change institutions, we need to pack them full of minorities,” said Steven K. Ridgill ’06, arguing that blacks should not isolate themselves from institutions that they feel treat them poorly.

Yesterday’s career fair also boasted such participants as Teach for America, the Peace Corps, the State Department, IBM and the Ivy Consulting Group.

The fair itself was a relatively low-key event, with roughly 15 students making the rounds every hour.

Young said he hopes eventually to expand the fair to include everything from pharmaceutical to entertainment companies—companies that typically don’t have a big recruiting presence on campus.

Christy McKellips and Jason Glenn, representing Harvard College Undergraduate Research Programs, said that they hoped to publicize research opportunities to undergraduates and to promote the idea of getting a Ph.D. for those who were interested in teaching.

“The House tutorial system is really set up and equipped for those who are pre-law, pre-med, or pre-business,” said Glenn, a History of Science graduate student and tutor in Pforzheimer House. “But there is not a lot of guidance for students who want to pursue a Ph.D. in the humanities and sciences.”

The FBI recruiter, who asked not to be named, said that she was trying to get undergraduates thinking differently about job opportunities, commenting that she believes public service jobs provided the most meaning.

Most students said they saw the fair as a chance to explore careers that go outside of the traditional business jobs Harvard students typically seek.

Kate E.C. Berndtson ’06, who said that Teach for America and the Peace Corps were the two booths that caught her attention, expressed gratitude for the event.

“Sometimes I think Harvard is a place where you can get locked into an expected track—into the assumption of pursuing a career in i-banking, law or business,” she said.

Janet C. Smith ’82, a representative from Ivy Planning Group—a management consulting firm that assists companies such as MetLife, Time Warner and Nike—echoed the students’ sentiments, recalling that the traditional firms and internships came knocking when she graduated, as well. As an alum, she said she strongly supports the BMF.

“As one of the leading management consulting firms focused on diversity in corporate America, we’ll be bringing on interns this summer and there’s no better place for me to look than my alma mater, ” she said. “Today’s graduates understand that there are opportunities in different places whether it be smaller companies like mine or companies in other industries.”

Samyr Laine ’06 said he saw the fair as a chance to speak with recruiters who were inaccessible at last week’s Career Forum, hosted by the Office of Career Services, and that the event was a good opportunity for minorities seeking jobs.

“There are a lot of agencies and corporations looking to diversify the work force and the alternative career fair is the chance for them to do so,” he said.