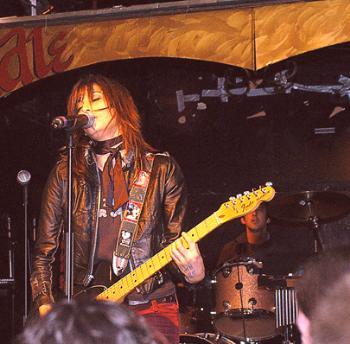 Excited fans shouted, “Gina! Gina! Gina!” as movie actor Gina Gershon strode onto the upstairs stage at the Middle East music club in Central Square. Gershon is the iconic star of cult classics like the lesbian-themed gangster-film parody Bound, directed by brothers Andy and Larry Wachowski, and John Woo’s surreal thriller Face/Off. Tuesday’s was the second-to-last performance in Gershon’s nine-city tour with the band Boys Against Girls to promote her new film Prey for Rock & Roll, which opens Nov. 7.

Gershon both starred in and produced Prey, which tells the story of aging bisexual punk-rocker Jacki, who, along with her all-girl band Clam Dandy, vows to take one last stab at breaking into the Los Angeles punk rock scene of the late 1980s. The film, directed by newcomer Alex Steyermark, is based on the autobiographical rock musical of the same name by Cheri Lovedog.

This is the first film Gershon has produced, an experience she summed up succinctly in an interview: “It sucks.”

“People just lie to you all the time. I hate that,” she said. “I think sometimes the actor in me suffered because of the producer in me…It was a very strange experience.”

Finding funds for the film as a new producer was especially difficult, she says, so it was shot on relatively inexpensive digital film.

Gershon’s show at the Middle East Tuesday night included a selection of songs from Prey written by Lovedog, and several of her own songs.

“Why not?” she said about adding her own songs into the mix. “It’s a tour, why not stick my own songs in, something I really care about.”

Gershon reports that audience responses to the show have been good despite the fact that most people haven’t yet heard the music.

This was true as well of her show in Cambridge where the audience came prepared for an unconventional performance. But a few sported Hedwig and the Angry Inch t-shirts—not surprising, considering the similar themes of the two musicals, the musical involvement of punk-rocker Stephen Trask in both projects, and Gershon’s position, since the release of Bound, as a lesbian icon.

Some audience members were even better prepared. At one point, Gershon pointed at one fan from the stage and teasingly accused him of buying and memorizing Prey’s soundtrack before her show.

In moments like this, Gershon’s rapport with the audience was electric. In response to shouts of love from the audience, she responded spunkily, “I love you, too, baby,” and, at another shout of devotion, she pointed to the audience member and called out, “Definitely—I’ve been waiting for you.”

Such off-the-cuff levity made the show a winning one, as did Gershon’s forceful voice and vibrant style. Her song selections for the set also balanced each other well. The harsh punk sounds of the film, notably in “Stupid Star,” “Pretty Pretty” and “Prey for Rock and Roll,” complimented the mostly softer, sultry tones of Gershon’s own songs.

The set was capped by a select few covers, including songs by Burt Bacharach, Nancy Sinatra, a few lines of Bob Dylan and a spur-of-the-moment Beatles song, “I’m So Tired,” which Gershon said her band had never played together before trying it out a few minutes before the show.

Gershon said she was exhausted from this year, during which she completed production of the Prey film and soundtrack and worked on a documentary about the making of the film that will air on the Independent Film Channel in February. In addition to these projects, she shot two other films and worked on an animated show for the Sci-Fi Channel during the past 12 months.

“Last year was the year to do everything I’d never done before,” Gershon said.

—Staff writer Alethea R. Murray can be reached at amurray@fas.harvard.edu.