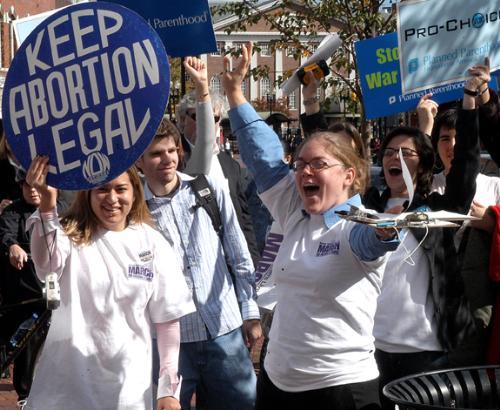 Harvard students joined a crowd of over 50 pro-choice activists at a rally in Brattle Square yesterday. The rally was meant to publicize a march to be held this spring in Washington D.C.
By Peter Zuckerman, Contributing Writer

A group of more than 50 pro-choice activists gathered in Brattle Square yesterday to drum up support for a demonstration slated for this spring.

The rally was one of many gatherings planned by pro-choice groups around the country to increase awareness about the “Save Women’s Lives: March for Freedom of Choice” demonstration, which will be held in Washington, D.C. on April 25.

The Harvard Students for Choice, Harvard’s pro-choice organization, hopes to send at least 25 students to Washington for the march.

“We’re trying to fill two buses,” Abigail L. Fee ’05, president of the organization, said last night at the Kennedy School of Government. To accomplish this goal the group is working closely with pro-choice groups the University’s graduate schools, she said.

According to Dianne Luby, president and CEO of the Planned Parenthood League of Massachusetts, “Harvard is playing a great role” in the preparation for the rally.

While the group assembled in Brattle Square yesterday stood up for choice, members of the Harvard Right to Life distributed leaflets and displayed posters of fetuses across the street.

Laura E. Openshaw ’05, vice-president of the club, said that at this point the Harvard Right to Life was unsure of the way it would respond in the future to rallies supporting Save Women’s Lives.

“We’ll be dealing with that as we hear more about their [pro-choice supporters’] plans,” she said.

Luby and others at the pro-choice rally said that this April’s march on Washington was likely to be the biggest such event in history, rivaling the demonstration held before the 1992 presidential election, which attracted 750,000 people.

The march is being organized by the Feminist Majority, NARAL Pro-Choice America, the National Organization for Women (NOW) and Planned Parenthood to ensure that women continue to have access to abortion, which organizers said they feel is a right that the Bush administration is threatening.

“With an anti-choice President and Congress, a woman’s right to choose hangs by a thin thread,” Executive Director of NARAL Pro-Choice Massachusetts Melissa Kogut said during the rally.

Kim Gandy, president of NOW, told the mostly female crowd, “The march is not the end, but the beginning of a new movement led by a new generation to protect the rights of our mothers and grandmothers.”

Indeed, organizers hope that young people will play an especially large role in the march.

“This march is part of a larger strategy to awaken awareness of young people to the horrendous legislation, laws, and rulings [that will be enacted] if they don’t send a message,” said Jatrice M. Gaiter, president and CEO of Planned Parenthood of Metropolitan Washington, D.C.

Kogut believes that the 1992 march should serve as a model for April’s gathering. “We marched, we organized, and remember what happened in 1992. We elected a pro-choice President and preserved the fundamental rights to privacy and equality,” she said to the enthusiastic audience.

Although the crowd that Kogut and the other speakers addressed was primarily female, the march will not be limited to women.

“It’s especially important for guys to stand up for choice,” said Michael A. Gould-Wartofsky ’07, a member of the Harvard Students for Choice and one of the few males in attendance.