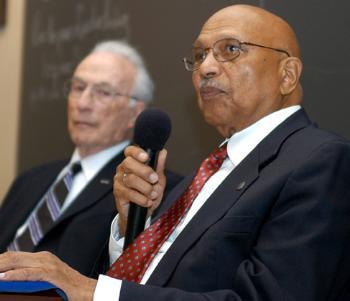 HERBERT H. HEILBRUN, left, and JOHN M. LEAHR speak during a lunch in their honor hosted by the Harvard Foundation for Intercultural and Race Relations. The two were third-grade classmates, reunited decades later.
By Joseph M. Tartakoff, Contributing Writer

Roughly six years ago, a World War II aviator attended a ceremony in honor of the black fighter pilots who had protected bombers like himself, looking for someone to thank.

Yesterday the aviator, Herbert H. Heilbrun, and his classmate, John M. Leahr, were honored by the Harvard Foundation for Intercultural and Race Relations at a lunch in Winthrop Dining Hall.

They were recognized for their service to the nation and recent efforts to improve race relations.

During the war, Heilbrun flew 32 combat missions. Leahr flew 132 missions as a Tuskegee airman, a member of the all-black fighter group trained at the Tuskegee Institute and Tuskegee Air Field in Alabama.

“The Tuskegee airmen never lost a bomber they escorted,” Heilbrun told the crowd of 50. “There’s a good chance I wouldn’t be sitting here today if it wasn’t for them.”

Heilbrun and Leahr first met at a ceremony in honor of Tuskegee airmen in Cincinnati. Heilbrun wanted to meet one of the men who had protected him.

“I wanted to thank somebody. John and I found how parallel and separated our lives were. We grew up 10 minutes away from each other in Cincinnati. We went to the same school,” Heilbrun said. In fact, both stood next to each other in a third grade class photo.

“There was one black boy in the class of 40 and I stood next to him,” Heilbrun said. “How sad it is that in a more perfect world we could have lived another 70 years together.”

Leahr and Heilbrun, now an honorary Tuskegee airman, have recounted their war experiences together at schools and corporations for the last five-and-a-half years.

“John and I have a lot of fun together. But there is one thing we don’t laugh about: the true meaning of two ugly words—segregation and racism,” Heilbrun said.

After the lunch, Heilbrun and Leahr answered questions in Boylston Hall. About 30 people attended.

At one point, an audience member stood and addressed both men: “This story is so great. It is impossible to describe it. Some divine power must have organized the meeting. There is something of such beauty and power here. I salute you.” The comment elicited applause.

Leahr said that there were 460 Tuskegee airmen, all based in Italy. Sixty-six were killed, while 32 were taken as prisoners of war.

“We went through hell just to be able to fight for our country. We were getting a lot less than what we deserved,” he said. “The guys taken said that the only time that they were ever treated as American officers was when they were taken [prisoner by the Germans].”

“The service has come a long way,” said Gillman, an Air Force captain. “It impressed me that [Heilbrun and Leahr] have made such a concerted effort to overcome racial barriers.”

Leahr and Heilbrun were invited to Harvard by the Harvard Foundation.

Leahr concluded his luncheon remarks by stating that race relations still need to be improved in the United States. “We’re going backwards on this problem. The biggest thing that the greatest generation didn’t accomplish was making all citizens citizens. Harvard is making that change but we need to do that all over the nation,” Leahr said.