No collisions in boat race as crowds brave weather to watch 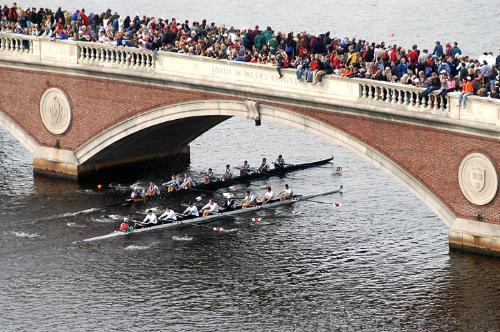 A view from the Dunster House belltower shows a packed Weekes Footbridge as two boats go neck-and-neck on the Charles River during the Head of the Charles Regatta yesterday.
By J. PATRICK Coyne and Joshua D. Gottlieb, Contributing Writerss

Forty-degree temperatures and intermittent drizzling reduced the crowds at this weekend’s Head of the Charles Regatta, but over 200,000 people still thronged the river’s banks and bridges to watch the 39th running of the race.

Executive Director of the Regatta Frederick V. Schoch—who blamed the weather for keeping fans at home—estimated the turnout at 209,000 spectators, only two-thirds the number that showed up last year.

“It’s cold as all hell,” said Los Angeles Rowing Club team member Sam Dillsi as she sat on the side of the Weeks footbridge yesterday. “We had to go buy gloves because we’re from L.A., and we weren’t prepared.”

But while last year’s regatta was marked by two major collisions on the water, Director of Information Katie Steward said that no such incidents took place at this year’s event, which drew 7,000 racers.

“The regatta ran as smoothly as I’ve ever seen it,” Schoch said.

Harvard Goes to the Races

Despite the uncooperative weather, Harvard students turned out to watch the action, darting across traffic on the

“I think it would really be unfortunate to miss this experience,” said Nicole Townsend ’07, who admitted to not looking both ways before she crossed JFK St. on the bridge.

In addition to the races, some students also took interest in the accompanying shoreside spectacle.

“The fried dough is pretty good,” said Heidi E. Reiner ’05, who also took pictures of two Falun Gong followers meditating by the Charles River. “That’s what I came for.”

Student reaction to increased campus security over the weekend was also varied.

Jeremy N. King ’04 complained about the prohibition and parties and heightened security and the posting of security guards at entrances to the Yard and River Houses.

“I think the school overreacts remarkably to this regatta,” he said.

“It sucks but it’s sort of necessary,” she said.

But the prohibition of campus parties merely demanded more creativity on the part of students, according to Alexandra P. Summer ’06.

“As far as students go, it made them find exciting and interesting outlets for their evening,” she said. “For example, I went Indian dancing.”

Harvard University Police Department spokesperson Steven G. Catalano said there were no unusual incidents related to the Head of the Charles.

With over 200,000 spectators from around the world converging on the Charles, at times the event took on a carnival-like atmosphere.

“I’m very surprised to see some things,” Angela Gordon ’07 said. “I didn’t know if I was in the right place at first.”

“How are they going to know who their supporters are?” asked Nicolson, standing at Edinburgh’s reunion tent.

Cambridge Boy Scout Troop 45 sold caramel apples and blue cotton candy from their tent by the river, after sleeping there overnight.

“That was nerve-wracking because of the rain and then the cars rolled by,” scout Patrick O’Connor said.

Outside of the weather, weekend visitors shared varied impressions of New England.

“The drivers are terrible,” said Jennifer Suhadolnick, also from Duquesne. “We got side-swiped like six times yesterday,”

But Kaitlyn Jolly of Boston, who spent the day selling seafood to spectators said that she heard very different impressions.

“Lots of people have been surprised by how nice people are in Boston,” she said.

Bill Griceo, a junior at Rutgers University, made the trip to Cambridge with his megaphone in tow and found a spot to shout from the Weeks footbridge.

“Wherever we go, we try to make a big ruckus,” said Griceo, holding a can of beer in each hand. “People generally stare at us.”

University of Wisconsin coach Tessa Molter said she was excited about the crowds along the race course.

Similar sentiments were shared by Ben Ames, an umpire for the race.

“It’s kind of like NASCAR,” he said. “Everyone watches for boats running into bridges.”

But Jeb Basley, a senior at Clemson, said that the actual rowing was worth the trip.

“I’ve been watching and everyone looked strong,” he said.

Hannah Connely, 8, formed her own opinion as she watched the rowers practice from the Anderson bridge on Saturday morning.