Crimson Plays It Safe With Backup At Helm 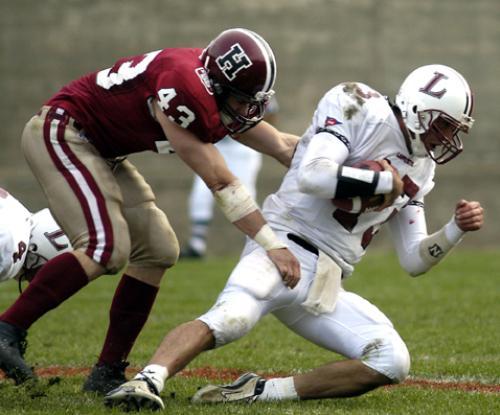 After giving up the ball nine times—on five fumbles and four interceptions—in its first four games, the Crimson offense kept the ball safe when it was most needed.

Playing with a first-time starter at quarterback, Harvard didn’t turn the ball over once in its closest game of the season.

Instead, it left the momentum-changing plays to the defense, which forced two second-half turnovers that quickly turned into 14 Crimson points. The first play—a fumble recovery by junior defensive tackle Matt McBurney—also turned the momentum of the game.

With the Leopards leading 20-14 in the third quarter, captain and linebacker Dante Balestracci sacked Lafayette quarterback Marko Glavic at the Leopards’ 16-yard line, and the football popped loose. It was recovered by McBurney, giving the Crimson a golden opportunity to take the lead.

“It was a momentum-changer, no question about it,” said junior quarterback Garrett Schires. “When these guys get a turnover, as an offense you are always happy. Plus we had a short field to work with.”

Junior linebacker Bobby Everett’s fourth quarter interception also led to a Crimson TD, and put Harvard’s turnover margin at +3 for the season, the best it has been all year.

After sitting out two consecutive weeks with a high ankle sprain, wide receiver Rodney Byrnes made his return felt immediately on Saturday. The junior led all Harvard receivers with five catches for 89 yards, and more importantly injected some energy into a Harvard offense that has been hampered by injuries all season.

“When we have our best guys on the field, we are a pretty solid offensive unit,” said Harvard coach Tim Murphy. “Rodney adds a lot of explosiveness, because when you have Rodney on one side and Brian Edwards on the other, it’s very difficult to double, especially when you’ve got the threat to run in-tackle like we’ve got right now.”

Edwards—who Murphy credited as the reason Lafayette made defending the pass its priority even with quarterback Ryan Fitzpatrick out—has emerged as the Ivy League’s top receiver (103.4 ypg) and the focus of opposing defenses in Byrnes’ absence.

But it was Byrnes who put an early charge into the struggling offense on Saturday.

Schires hit a wide-open Byrnes for the QB’s first completion of the season, a 27-yard pickup that was the biggest play in Harvard’s first scoring drive.

The captain had to do just that—though not often—when the Leopards and their starting tight end Tim Walsh came to town on Saturday. Balestracci and Walsh, both seniors, were classmates and teammates at New Bedford High School in New Bedford, Mass.

“This season’s been a lot of fun for me,” Balestracci said. “I got to play against both my brothers and one of my best friends from home.”

Balestracci’s two younger brothers play for Brown and Holy Cross, so the senior is now 3-0 against friends and family.

Still, both players put on a show for the hometown crowd that came out in full force. Walsh had four catches for 56 yards and his first two TDs of the season, while Balestracci posted nine tackles, two of which went for a loss.

It was the first time the two have played against each other, as Balestracci was sidelined during the 2001 meeting with an ankle injury.