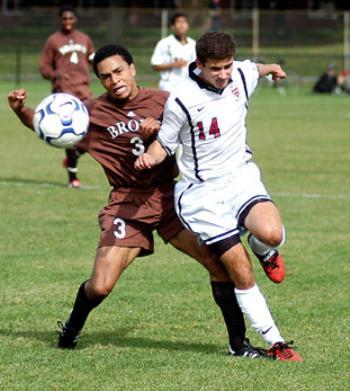 Sophomore midfielder NICHOLAS TORNARITIS (14) was one of three Crimson players with shots on net against Brown on Saturday. The Bears prevaviled 3-0 on Ohiri Field.
By Jane V. Evans, ContributingWriter

The Crimson (5-3-4, 0-2-1 Ivy) hoped to return the favor Saturday against the No. 20 Bears, who entered the game undefeated in league play.

But Brown (7-3-1, 3-0) had different ideas, as it defeated the Crimson 3-0 again, scoring on an indirect kick from inside the box, a penalty kick and a deflection.

With Yale’s 1-0 loss to Cornell, Brown becomes the only team to have won all of its Ivy games.

“I am disappointed with the refereeing and the performance overall,” Harvard coach John Kerr said. “We didn’t have the right approach and we were too lackadaisical.”

For the majority of a physical first half, the game remained close, though Harvard escaped several close calls thanks to a quick-thinking defense. But with under four minutes remaining in the half, a questionable call gave the Bears an indirect kick from seven yards out.

Senior Grayson Sugarman tracked back and lunged to poke the ball away from a Brown attacker. But sophomore goaltender Ryan Johnson used his hands to play the ball and the indirect kick was awarded. It is illegal for the goalie to touch the ball with his hands if a teammate played it back to him intentionally.

With the ball so close to the net already, the Crimson had no choice but to send all of its players to the goal line in order to form a protective wall. But Brown forward Marcos Romaneiro shot the ball at the wall, where it caromed into the net to put the Bears up 1-0.

After the half, Brown came out firing again and won a penalty kick when captain and defender Andrew Old knocked over a Brown player he was attempting to double team. Romaneiro beat a diving Johnson to the left side of the net at 54:10, prompting a second large celebration from the Bears.

“We didn’t really pay much attention to the cheering,” sophomore Brian Charnock said.  “We were focused on our own game.”

But Harvard’s hopes were dashed when Brown scored again just six minutes later. Johnson was frozen as a shot bounced off a Crimson defender and into the net.

The three goals are the most Johnson has conceded all season, and raise his goals against average to 1.08.

“The game was frustrating,” senior midfielder Kevin Ara said.  “We came out to play, and we got really unlucky. We have to make our own luck in this game.”

“We needed more passion,” Kerr said. “We can’t rely on skill to make the difference. We need more energy, excitement and a more aggressive approach to make things happen and be proactive in the game.”

Kerr hoped to inject such passion into the squad with some personnel changes, starting junior Zach Chandis—who normally plays as a defensive midfielder—at right back in place of junior Ben Mottau. Chandis joined freshman David Williams, sophomore Will Craig and Old in the back four.

Kerr also sent in Sugarman—who had appeared in just two games this year prior to yesterday due to injury—early to replace sophomore midfielder Anthony Tornaritis.

Once the Crimson trailed by two goals, Kerr switched to a 3-4-3 formation to put more pressure on the Brown defense in hopes of exploiting a hidden weakness. But such an opening never presented itself, and the Crimson left the field still winless in the Ancient Eight.

The Crimson next hosts Princeton on Saturday in the fourth Ivy matchup of the year for both teams. Last year’s match was very physical and saw seven yellow cards issued in the first 62 minutes.