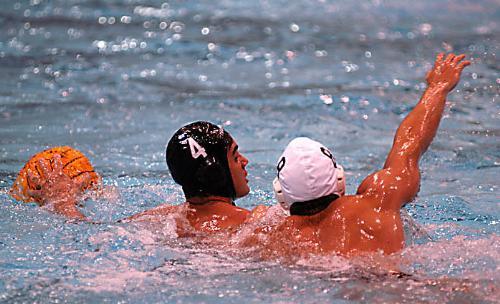 The Harvard men’s water polo team was a bigger tease than Britney Spears this weekend.

While it had the opportunity to win all three home games—its first contests at Blodgett Pool all season—this weekend, the Crimson (2-13) came away with just one victory, beating Connecticut College 9-6 yesterday morning. Harvard lost 7-6 to both No. 20 MIT on Friday and Queens College yesterday afternoon in two very close, very heated games.

The Crimson’s second win of the season came in the form of an all-out attack on the Camels (1-9).

Connecticut College put itself on the board late in the first quarter on a goal with 1:33 remaining, but never fully recovered from the early assault.

Since the Crimson had a second game to worry about in the afternoon, Harvard coach Scott Russell took advantage of the lead and turned to his reserves in the second quarter. The Camels scored two goals, making the score 5-3, prompting Russell to reinsert some starters with 1:20 left in the first half.

Offsay increased the Crimson lead to 6-3 before the break. After a pass from senior Todd Schulte, Offsay fought off the two defenders on top of him and scored as he was being plunged underwater.

Senior goaltender Reid Bolton, who came into the game in the second quarter, held the Camel offense to three goals in the second half. Connecticut College did close the margin to 6-5, but Harvard answered back with goals from senior Will Garrigues—his first of the season—and Gerrity.

At the end of the game, two hours before its contest against Queens College, Harvard hopped out of the pool with its second win of the season, a victory it sorely needed after its heartbreaking, triple overtime loss to crosstown rival MIT two nights earlier.

Though the Crimson played tough through four quarters, overtime and double overtime, it fell to MIT in sudden-death triple overtime.

After almost 37 minutes of play, the Engineers won the game on a penalty throw by junior Dan Jacobs after a foul was called on Garcia.

“To end the game on a four-meter is a really tough way to lose,” sophomore goalie Robbie Burmeister said. “Four-meters are hard for goalies because we either guess a side or just come out and try to take it off the angle. I got a pretty good piece of the ball, but obviously not quite enough.”

It was Garcia’s goal that allowed the Crimson to force overtime when he scored with 0:46 left in double overtime to tie the score at six. Engineer junior David Lohrey had scored twenty seconds earlier, putting the ball past Burmeister and into the right corner of the net.

Burmeister posted 14 saves throughout the game and helped keep it close until the bitter end.

Harvard led 4-3 entering the fourth quarter, but Lohrey scored early. Jacobs broke the tie with a goal after MIT was awarded the ball when a penalty was called on Burmeister for going after the shooter before the ball was released.

With less than 1:30 remaining in regulation, Harvard announced it would not go quietly into the night as Offsay scored and restored the tie at five apiece after passes from Gerrity to Garcia and Garcia to Offsay.

The teams shared control of the ball in the first quarter, but it was the Crimson that drew first blood. The return of Schulte, who had been sidelined with a broken foot, proved to be a big asset for Harvard. Schulte scored the first goal with 5:47 left in the second quarter.

MIT answered right back with a shot from Lohrey that bounced off the right post and into the goal 30 seconds later.

Harvard led 3-1 when, with just 10 seconds left, Jacobs scored to narrow the lead to one goal. Each team notched one more goal in the third, contributed by Offsay and Jacobs.

Being home seemed to make the team play harder.

“That was a big help,” Offsay said. “The fans Friday night were great. [They] did a great job showing up. We appreciated that.”

“It was pretty sweet to have all that support,” Burmeister added. “I know it made me want to play better to please the home crowd.”

In its defeat against Queens College, Harvard succumbed to the Knights’ attack in the fourth quarter.

The score was tied at five after the third. Filip Tomasevic put the Knights on top with a ball that ricocheted off the right post and into the goal with 3:21 to go.

Garcia retied the score with a goal with 2:56 left in the game, but that was the last time Harvard was able to get the ball past Queens goalie Vedran Sokac.

Knights senior Mikhail Klochkov snuck the ball into the net between Burmeister and the left post for what would prove to be the Knights’ winning goal.

The Crimson took the lead early with a Schulte goal in the first after a string of passes from junior John Lynch to Gerrity to Garcia.

The Knights were able to score two goals before the second quarter, however. Klochkov fired a shot that was too hard for Burmeister to handle, and the ball sailed off his hands and into the goal. Later, when Burmeister took a few strides out of the goal to smother the ball, Klochkov lobbed it over his head and into the open net.

Harvard tied the score before the half, and either team had a shot at winning the heated contest. Schulte, Gerrity and freshman Alasandro Lazzarine all tallied goals for the Crimson before the break, while Klochkov and Tomasevic scored for the Knights.

Throughout the weekend, Garcia proved to be an invaluable player and helped the Crimson raise its level of play by scoring goals at necessary times.

Harvard has two weeks to rest until it hosts the Northern Championships, which start Oct. 31.

“The big thing is winning our first-round game,” Offsay said. “We are optimistic and confident.”

Four teams will move on to the Eastern Championships later in the season, and Harvard must win its opening game to be one of them.

“Our biggest thing to work on is continuing our high intensity,” Burmeister said. “This weekend we played on a much higher level than we had all season. It would help if we had the same fans that came out on Friday night.”