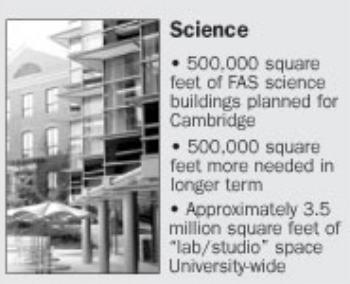 The outline for Allston—which came in the form of an open letter from Summers to the Harvard community—ended years of speculation about the future of 200 acres of land across the Charles River.

At the year’s first Faculty meeting yesterday, professors sharply critiqued details of the proposal, which was released in the letter just a few hours before. But they did not challenge the plan’s central vision—creating an expansive science presence in Allston.

Professors at the meeting criticized everything about the plan from the process behind it—which one said was not consultative enough—to the possibility that the plan would lead to what another called the “splintering” of the Faculty of Arts and Sciences (FAS).

Summers’ plan calls for an interdisciplinary science campus integrating scientists working under the banners of FAS, Harvard Medical School (HMS) and the School of Public Health—the last of which would move to Allston in its entirety along with the Graduate School of Education.

The plan also calls for more graduate student housing in Allston and for the creation of “culture and community” through the potential move of museums and the construction of restaurants and shops.

Under the plan’s final point, which at the meeting Summers called “perhaps more speculative but possibly of the greatest importance in the long run,” Allston would be home to undergraduate student space, including one or more new Houses.

The plan closely mirrors a set of recommendations presented to Summers and his top deans at their mid-summer retreat.

Although Summers calls all of the plan’s points “working hypotheses,” they mark the most concrete public statement the administration has yet made on Allston’s future.

Summers said in an interview yesterday he hoped groundbreaking on the new campus could begin in “a few years,” but said he had not determined whether the first buildings would be for housing or for new programs.

University planners will now take as given that long-term expansion of science cannot take place in Cambridge, and that alternative possibilities for Allston—such as anchoring a campus around a relocated Law School—have been discarded.

Though plans are in the works for expanded science space in Cambridge, Summers wrote in the letter that “even assuming we fulfill those plans over the next several years, we will before long confront an insufficiency of space for science.”

Summers’ plan does not detail whether existing parts of HMS or FAS will move or whether the science campus will consist of only new initiatives.

Within FAS, the Division of Engineering and Applied Sciences (DEAS) is a likely candidate for a cross-river move.

DEAS Dean Venkatesh “Venky” Narayanamurti said yesterday that if his department continues to grow, it will need more space than Cambridge can provide.

“We very well may have to have two parts of DEAS—we might have applied science right here and engineering in Allston,” he said.

Summers has also repeatedly championed the life sciences during his tenure, which he said yesterday will likely play an important role in the new campus.

Echoing what has long been one of the central concerns of FAS scientists, several professors at the meeting yesterday said they were worried that the plan would create divisions between faculty and students.

In response to faculty questions about the feasibility of holding science classes in Allston, Summers committed yesterday to keeping the “main science classes” in Cambridge. But he added that tutorials and lab work might take place in Allston.

Professor of Physics and Applied Physics Daniel S. Fisher, who had a testy exchange with Summers at the meeting, said that the plan could threaten to break bonds between FAS science departments.

“For many years, biology, chemistry, physics, engineering and applied sciences have been close together in Cambridge, but their interactions have been limited,” Fisher said in an interview following the meeting. “But over the last five years and even more over the last two or three years, the interactions between them have grown extensively, and the potential for taking advantage of those interactions is now enormous.”

“Yet the energy to do so is in danger of being dissipated” by the focus on Allston, he added.

Cabot Professor of the Natural Sciences Douglas A. Melton said that minimizing divisions was “certainly a concern” for the task force that will plan scientific activity in Allston, of which he is a member.

He pointed out that the University’s biology research is already split between FAS’s Cambridge campus and HMS in Longwood.

“Wherever you use the scalpel, some people will be uncomfortable,” former Dean of the Faculty Jeremy R. Knowles said of the potential division in an interview yesterday.

At the meeting, professors did not discuss what Summers said was the element potentially most important to the move: the presence of undergraduate life in Allston.

Dean of the Faculty William C. Kirby did not mention the possibility of new Houses in Allston in a letter he sent to the Faculty yesterday about the science aspects of the announcement.

He said in an e-mail yesterday that he made the omission because “the possibility of undergraduate housing in Allston is in the rather more distant future.”

Summers indicated that neither of the possibilities for undergraduate housing in Allston, either expanding the student body and building entirely new Houses or simply relocating the Quad, could be enacted within the next decade.

He emphasized in an interview yesterday that new Houses could relieve the current undergraduate housing crunch and allow for an expanded student body.

“It would introduce a community of students into Allston who would doubtless invigorate the expanded campus,” Summers wrote in the letter.

Faculty at the schools of public health and education have favored a move because both face space crunches in their current homes.

“We have classes where some students must sit on the floor,” Lagemann wrote in an e-mail. “The list is long.”

Summers wrote in the letter that both schools will see major physical and academic benefits by moving and that the space they vacate will “open up new long-term opportunities for schools nearby.”

According to the letter, Kirby will name at a later date the head of the group that will investigate undergraduate life.

In his letter, Summers said that faculty will make up the majority of the task forces and that the administration would consult broadly in refining its direction.

But yesterday, Summers was criticized for insufficient consultation to date.

Fisher said that efforts by faculty over the past year to suggest ideas for the short-term future of science in Cambridge had been “denigrated” by Summers and Hyman and noted that the provost’s previous committee on science in Allston had met infrequently.

After the meeting yesterday, Fisher added that the fact that the announcement came just hours before the Faculty meeting prevented a full vetting of the issues.

A River Runs Through it:

Harvard's expansion in Allston has been decades in the making

1980s: Robert Silverman, the director of Harvard's Office of Planning,concludes that the University does not have enough room to grow in Cambridge and engineers a plan for Harvard to purchase land in Allston.

1999: A faculty planning committee recommends to the President and the Corporation that Allston be developed as a major new academic campus, rather than as an annex for non-essential University functions.

September 1999: The faculty of Harvard Law School--viewed as a prime candidate for a cross-river move--votes overwhelmingly against moving to Allston.

Summer 2000: Harvard purchases an additional 48 acres of land in Allston from the Massachusetts Turnpike Authority.

Winter 2002: A faculty planning committee settles on three scenarios for Allston. One option involves moving professional schools, including the law school; a second focuses on creating a science campus with possible commercial tie-ins; the third centers on cultural options.

July 15, 2003: The University's deans and president hear a plan for Allston at their summer retreat. The plan calls for science and undergraduate housing, as well as Harvard's Graduate School of Education and School of Public Health, to move across the river.

October 21, 2003: Summers sends a letter to Harvard faculty officially announcing his plan for Allston, ostensibly the same plan heard by the deans at their mid-summer retreat.