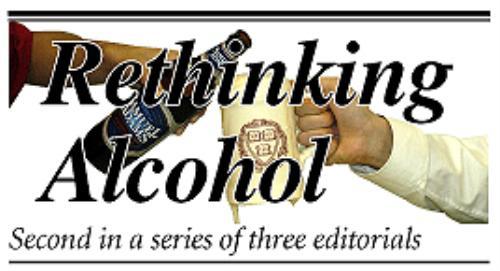 By The CRIMSON Staff

As The Staff argued in the first of this series, abuse of alcohol is a huge problem at Harvard; unhealthy binge drinking harms both the health of the drinkers and the health of the University community. In this second editorial in a three-part series, we will present our ideal solution to the problems we described yesterday.

The College’s first goal should be for all students who choose to drink, from first year to senior year, to drink responsibly. Ideally, no Harvard student would regularly engage in excessive binge drinking or habitual over-consumption. This does not mean that partying college students should not get tipsy, or even drunk, just that they should not overdo it. With the proper attitude on campus, more Harvard undergraduates might enjoy alcohol socially without taking it to far—committing violent acts or requiring a trip to University Health Services (UHS).

Harvard has identified the need to improve education and treatment for alcohol on campus. Such pervasive problems as dangerous binge drinking and alcohol abuse require a drastic solution. While unconventional, the most effective way to improve attitudes on campus and students’ relationships with alcohol is to openly disobey Massachusetts state law.

State law prohibits anyone under the age of 21 from drinking alcoholic beverages, and as a consequence, it is illegal for Harvard to encourage its underage students to drink responsibly. But a disproportionate number of UHS check-ins are first-year students, many experiencing alcohol for the first time. If first years were taught a few basics during freshman week—that one shot won’t kill you but a whole bottle of Jack Daniels might, or that drinking on an empty stomach is a dangerous enterprise—then there would be a marked decrease in first-year alcohol abuse. A brief, rudimentary education program could also combat habitual over-consumption; once students know the danger signs, such as drinking heavily four or five days a week, they might be able to avoid the problem themselves or seek help for friends and roommates when they observe dangerous signs.

Even such a reasonable program for first-year students is an impossibility given Massachusetts state law, but that does not mean that Harvard can’t fight. Advocates of upholding the state law raise concerns that individuals under 21 years old may drink and drive; but on the Harvard campus shuttle bus service is abundant, and few students have the cars necessary to commit such a dangerous offense. The University has taken a principled stand and defied state and federal laws in the past. During his tenure, former University President Neil L. Rudenstine spoke openly against the drinking age of twenty-one. The College should honor this legacy and no longer tacitly bow to the state’s prohibitions; Harvard cannot afford to let this law limit its ability to educate students.

When underage drinking is destigmatized and first years get a few words of wisdom during freshman week, they will be less likely to get dangerously sick. And without fear of discipline, students will be more likely to go to UHS when they do overdo it. While the current College policy is that students will not be punished solely for being drunk, students may fear discipline for drinking in a first-year dorm or another offense that is punishable by the administrative board—even if the punishment is a slap-on-the-wrist admonishment.

The bottom line is that underage undergraduates are going to get their hands on alcohol, no matter how restrictive state law or University policy is. The College can foster a healthy drinking culture on campus by taking a principled stand, or it can let its students continue to drink in the dark.