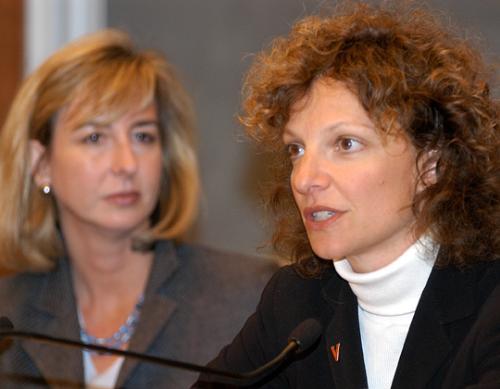 The lieutenant governor had measured praise for her alma mater, a year and a half after students protested that the College’s disciplinary procedure and services for sexual assault victims were grossly inadequate.

“It’s incumbent on all of us to be forward-looking and to encourage all of the administration at Harvard to be as committed to combatting sexual assault as possible,” Healey said.

The College implemented wide-ranging changes to sexual assault support services this fall, following the recommendations of a student-faculty committee.

“You are sending an extraordinarily dangerous message to offenders out there,” said Cathy Greene, interim executive director of Jane Doe Inc., an umbrella organization for the affected centers.

Women’s Studies Lecturer Diane L. Rosenfeld, who referred to sexual assault as “domestic terrorism,” lashed out against what she identified as the nation’s sexist vocabulary.

She recalled confronting a man in a Chicago sporting goods store who had asked his friend, “Isn’t this pimp?”

“You know that a pimp is a man who owns a woman?” Rosenfeld said. “Is that okay? Is that cool?”

In the evening’s most emotional moment, Dawn Dougherty, director of public education and outreach services at the Boston Rape Crisis Center, recounted her own experience of sexual harassment the previous evening. She described how a man repeatedly made unwanted advances as she waited for the T.

Referring to the perpetrator, Dougherty said, “He, as a man, walks around with both physical and societal power over me.”

Members of the Law School group Students Organized for the Prevention of Domestic Violence presented Healey with a petition bearing roughly 280 signatures which demanded the restoration of rape crisis center funding, according to Karen Y. Paik, the president of the group.

Healey, who has campaigned against the cuts, noted earlier that the governor’s original budget did not reduce funding for the centers.

David Adams, founder of the abuser education program Emerge, claimed a close connection between domestic violence and sexual assault and warned of even further dangers.

“Sexual assault seems to be an indicator, a risk-marker, for homicide for women,” he said.

Rosenfeld said women are at a disadvantage in the eyes of the nation’s justice system.

“The law does fail to protect women,” she said.

The panelists were surrounded by posters from the Teen Action Campaign aimed at raising awareness of sexual assault. The posters drew word plays on common relationship terms.

One implied that only a thin line separates “He hits on girls” from “He hits girls.”

While all of the panelists stressed the importance of awareness in combatting sexual assault, they also urged a national change in ethos and attitude.

“Knowledge in and of itself is not going to make a difference,” Greene said.