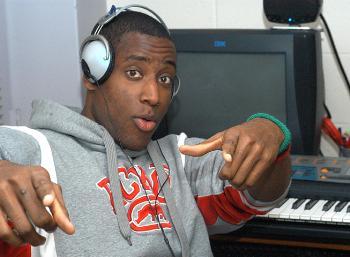 This senior Government concentrator from the student band Justice League is all over the place artistically, adding his own flavor to Cambridge in both song and in prose. He’s known for his lyrical sophistication and (Holyoke)-street smarts.

Believe it or not, I’m working on a novel right now. I’m writing in Jamaica Kincaid’s class. And I’m also working on my own album. For about two years now, I’ve been building up material for the album. I’m also producing a couple of tracks for another student. And of course, working on some new stuff for Justice League, some new beats and hooks.

How is Harvard as a community for musicians?

It’s hard. I really can’t think of many places that would be more conducive and at the same time more hostile to musicians. Harvard doesn’t give you much time for anything else. But that stress and pervasion in your life forces you to be creative and come out with really profound stuff. I don’t think it would be the same without that impetus.

If you weren’t at Harvard, where would you be?

Hopefully making music somewhere in the studio or writing something.

How would you describe yourself in three words?

Where do you imagine yourself in ten years?

In ten years I know I’ll be doing something creative whether it’s writing or making music for mass consumption.

Where is Justice League in the next ten years?

The rest of Justice League I see as being very successful in whatever they do. I don’t know whether they want to go down the same road I want to go down. But they all have a lot of heart and intelligence, so I see them as being successful.

What moment would you like to relive from the past year?

The Fabolous concert—I would do that over, and sleep the night before. I feel like when you’re performing, you have a duty to give people 110%. I would’ve liked to have the opportunity to be fresh. And then I performed with Cody Chesnutt when House of Blues was still open. I did like two verses and I was hearing the words come out of my mouth, but it was like I wasn’t even saying them.

What has been your most fulfilling class or experience at Harvard?

The most fulfilling class so far is the one I’m taking right now with Jamaica Kincaid. She helps me address some of the trials and tribulations I have as an artist. I feel like any real artist is concerned about whether or not they have something new to say and she helps me address some of those issues. And then, the very first time I performed here was freshman week with three guys I barely knew; I was nervous, but I did it, and it was like a turning point of sorts. I started to think, “Maybe I can perform and people will like it.”

I would say three. I don’t sleep a whole lot at all. There have been days that I stay up for 28 or 29 hours in a row, then sleep eight hours and do the same thing again. And a lot of times I say things that just come to mind and I make jokes that are probably inappropriate. I just say whatever’s on my mind. Probably has to do with me not sleeping a lot. And, I eat a tremendous amount of popcorn. If you see me at Quincy Grille, it’s probably because I’ve run out of popcorn.

Which musician do you admire most?

I used to have heroes but I guess I’m becoming jaded. It’s a part of growing up, I guess. I don’t have musicians that are heroes, but I have musicians that I admire for their willingness to take risks. Outkast; for his time, Miles Davis; Eminem, of course; Radiohead. I listen to people that take risks. I like musicians that seem to be challenging themselves, like Yankee Hotel Five. Or I listen to this guy, Jack Dragonetti—he produces music for VW commercials, but he has an album out and it’s cool.

What venue do you dream of performing at?

I would love to be one of those featured acts on the MTV Movie Awards, to come in with props and have people know your song already, and expecting certain lines to come out. That would be really hot.