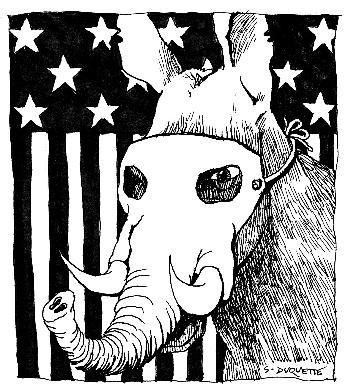 Next year’s elections will decide far more than who occupies the White House for the next four years. What is at stake is the very survival of the Democratic Party and its core ideals.

In the 1970s and 1980s the Rainbow Coalition made great strides in building a national coalition that included communities of color, labor and gays and lesbians. However, since the late 1980s, the Rainbow Coalition’s infrastructure, so vital to the evolution of a progressive agenda, has been left by the side of the road, and conservative groups, both Republican and Democratic, have passed it by.

The question is: will we allow the dream of Dr. Martin Luther King, and the ideals of equality that he fought and died for, to wither on the vine?

In my travels across the nation, and especially to the campuses of America’s colleges and universities, the answer, thankfully, has been a resounding “no.” Dr. King’s dream is alive in the hearts and minds of all people who believe in fairness and equality. In fact, Americans are hungrier than ever for clear leadership that speaks directly to the issues confronting all those who face economic hardship, crumbling schools and poor access to healthcare.

But is the Dream alive in the hearts and minds of our national leaders and our Democratic candidates for president?

In Florida during the 2000 Presidential Election, tens of thousands of minority voters were disenfranchised, yet in the aftermath of that debacle, Democratic members of the Senate did next to nothing to address this situation.

At the same time, we have Democratic members of the House and Senate who consistently vote to support military action in Iraq despite the fact the Bush Administration has offered us no plan outlining identifying our objectives and how to meet them.

We also have Democrats in both Houses of Congress that have supported Bush’s massive tax cuts for the wealthy, and his large exports of our tax dollars to the Middle East, while the fundamental needs of millions of Americans remain unmet.

With so many Establishment Democrats masquerading as Republicans these days, it is no wonder that the core ideals of our party have eroded as critical issues such as civil rights and equal opportunity have faded from our national debate.

For this reason, it is essential that we take up the challenge and rebuild a broad progressive coalition from the ground up. In this vein, I have called upon civic, community and business leaders from across the nation to finish the work of the Rainbow Coalition and build a truly diverse national coalition to call the conservative policies of George W. Bush into question and to hold the Democratic Party’s feet to the fire on the issues economic development, equal opportunity and racial equality.

It is high time that we address the critical issues confronting Americans here at home before we ship billions of our tax dollars overseas to improve the lives of those in other countries.

To me, it is unconscionable that we could export $87 billion to Iraq to improve schools and healthcare while American’s are not having their fundamental rights and basic living conditions needs met. Remember, 75 million Americans right now are without health insurance, over 40 million are underinsured and millions of Americans here at home attempt to learn in overcrowded, crumbling schools.

Even more unconscionable are the “liberals” who claim to be against the war in Iraq while at the same time arguing to keep our troops there and voting to pay for a long-term occupation of Iraq. Those against the war should openly argue, as I have, for an immediate withdrawal of U.S. forces from Iraq so we can bring our troops home and allow the U.N. to assume the lead in rebuilding that nation.

In our Constitution we have a fundamental right to own a gun, but no right to an education. Yet, if you were to ask, an overwhelming number of Americans would vastly prefer to have a high quality education rather than a gun.

If the Democratic Party has any hope of growing within communities of color, its leaders must act decisively to secure the right to vote for all Americans now.

Some may challenge these bold initiatives as too costly. I firmly believe that the more important question is how can we afford not to pay for these needed reforms, especially when you consider that the revitalization, repair and construction of hospitals, nursing homes and schools will create jobs and increase revenue.

To further bolster this proposal, I would fully repeal the Bush tax cut and impose a “Fair Tax” system in its place that would provide real relief to working people with a focus on giving breaks to new businesses not old millionaires.

George Washington once said: “Labor to keep alive in your breast that little spark of celestial fire called conscience.”

Our campaign seeks to keep alive the conscience of the Democratic Party by building a new, dynamic infrastructure to push forward progressive values and ideals.

With your help, we will provide that vital spark to bring Dr. King’s Dream and the American Dream together, not only in the hearts and minds of our leaders, but in the priorities and policies of our nation as we traverse the 21st century, together.

The Rev. Al Sharpton is a civil rights leader in New York City and a candidate for U.S. president. He will be appearing at “Conversation with the Candidates” in Kirkland House at 4:30 p.m. and on “Hardball” at the Institute of Politics at 6 p.m. this evening.