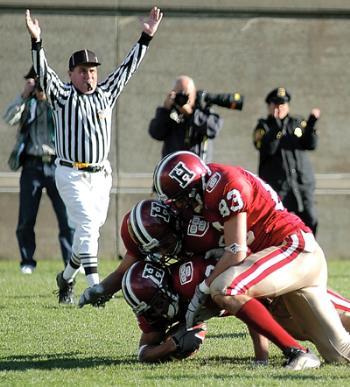 A trio of Harvard players, including freshman wide receiver COREY MAZZA (83), celebrates the Crimson's overtime win Saturday as the official signals the game-winning touchdown in the background.
By Lisa Kennelly, Crimson Staff Writer

A game this intense could only be decided in overtime.

In the 96th meeting between No. 20 Harvard (6-0, 3-0 Ivy) and Princeton (1-5, 1-2), with the weather as crisp and clear as the play was messy and muddled, it didn’t take long to see that this year’s edition of the historic rivalry could only end in dramatic fashion.

A four-yard touchdown pass to junior wide receiver Rodney Byrnes from junior quarterback Garrett Schires on the Crimson’s first and only overtime possession sealed the win for Harvard 43-40 and capped a raucous, high-scoring game that saw the two teams combine for over 1000 yards of total offense.

“I’m not sure we outplayed them today, our kids just found a way to win,” said Harvard coach Tim Murphy, adding that he had anticipated a much more defense-oriented game.

Although the Tigers rarely contend for the Ivy League crown, they can always be counted upon to hang tough with the Crimson for all four quarters. This year was no exception, especially with offensive mainstay junior quarterback Ryan Fitzpatrick still out with a broken hand. A 49-yard run from Princeton tailback Jon Veach with 8:53 left in the first quarter put the Tigers up a quick 7-0 and made it clear that Princeton was not about to be a pushover. It marked the first time this season that Harvard had not scored first.

Veach, who until this week had been splitting time with the Tigers’ other back Branden Benson, had a career day, shredding the usually impenetrable Crimson defensive line for 205 yards on 34 carries and two TDs.

“We knew they had two very good backs, but to be completely honest they had featured the other kid [Benson] most of the time and we were under the impression that was who they were going to go with,” Murphy said.

But the defense stepped up when it was crucial, coming up with a vital fourth quarter stand with the score knotted at 37 and 2:25 left to go in the game. Princeton had intercepted Schires—the first pick of his career—and recovered the ball on its own 49-yard line. A short rush by Veach and an 18-yard break by quarterback Matt Verbit had the Tigers pawing at Harvard’s 30-yard line. Veach carried for another four yards and it seemed as though Princeton would pummel its way on through the defensive line and the Crimson’s hopes of an undefeated season.

But the beleaguered defense was not about to let that happen. Veach was smothered for no gain on his next attempt by captain linebacker Dante Balestracci and junior linebacker Bobby Everett. On the next play, facing third-and-six, Verbit’s pass bounced off the stomach of senior defensive end Brian Garcia and the Tigers were forced to turn to their less-than-reliable kicking game.

“When we talk during the week, we always prepare for that situation where it’s going to come down to [a defensive] stop. You’ve got to be ready for that at all times,” Everett said.

Kicker Derek Javarone came on for a 43-yard field goal attempt and the Crimson countered by using two of its timeouts in an attempt to throw him off. As the crowd of 14,000-plus held its breath, Javarone’s kick sailed low and left and the game went to overtime.

The defense was also instrumental in keeping the game to only one overtime. Starting from the 25-yard line, Princeton could only push as far as the 19 and was forced to kick a field goal to put them up 40-37 with the Crimson’s OT scoring chance still remaining.

On its overtime possession, Harvard came mighty close to causing another tie situation, facing third-and-goal on the four-yard line. Having handed off to Dawson on every single overtime play, the chances of running it in looked slim. In a plucky call, Murphy sent out five wide receivers and the offensive line bought Schires enough time for the QB to find Byrnes in double coverage and secure Harvard’s eighth straight win over the Tigers.

“I thought that the line did a great job and made great blocks and Garrett stuck it right where it needed to be,” Byrnes said. “I was just lucky enough to be in the right position at the right time.”

The team mobbed the field and swarmed on top of Byrnes and Schires in the Princeton end zone as the Tiger players could only look on in disbelief.

“How hard is it to swallow? I can’t think of any taste in my mouth that would be worse that this,” said Princeton coach Roger Hughes.

It was by no means the prettiest game of the season, but once it was over all the miscues could fade into the background in favor of the more sparkling moments such as freshman Clifton Dawson’s second straight outstanding offensive performance. The tailback finished with three TDs and 183 yards on a whopping 40 carries—tied for the second most by a back in Harvard history—essentially bearing the entire rushing responsibility for the Crimson.

“I was just lucky to be given the chance to run the ball 40 times,” Dawson said, adding that at the end of the game he was surprised he had that many carries.

“Obviously, he’s an outstanding back and we are going to have to deal with him another three years,” Hughes said of Dawson.

In his second week filling in for Fitzpatrick, Schires again posted impressive numbers, finishing 18-of-30 with 261 yards, three TDs and one interception. He constantly hit up acrobatic junior wide receiver Brian Edwards for first-down yardage.

“I’ve got to give credit to our offensive coach Dave Cecchini and our quarterback coach, they just did a great job,” Murphy said. “We’ve got new guys in there on the offensive line and at quarterback, and to have the type of production that we’ve had the last two weeks really speaks a lot to Garrett and our assistant coaches.”