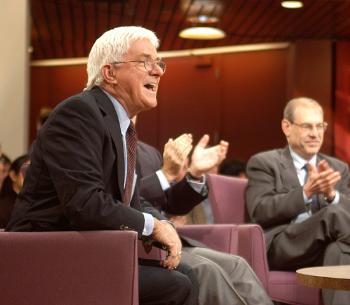 Talk show host PHIL DONAHUE joined a collection of historians and students to try to pin down the legacy of John F. Kennedy ’40 during a taping for the History Channel.
By Elena Sorokin, CONTRIBUTING WRITER

An unusual assembly of historians, college students and talk show host Phil Donahue tried to tease out the lasting legacy of John F. Kennedy ’40 at a History Channel taping at Harvard Saturday.

Forty years after Kennedy’s death, a motley audience filled the John F. Kennedy Jr. Forum for the televised discussion, which will air later this month as a special program, “The Kennedy Presidency: History or Hype?”

Ted Sorensen—who advised Kennedy for 11 years, both during his senatorship and his presidency—viewed the open-floor discussion from his seat perched above the forum.

The show seemed caught in its title’s own conundrum, one part serious intellectual debate, the other part made-for-TV testimony.

After an audience warm-up and a last-minute nose powdering, the cameras began to roll and Donahue slipped into his talk-show routine.

He encouraged the audience to jump in and share their views of Kennedy.

“You’re not a wax museum,” Donahue said. “Let’s not make this look like church.”

Members of the audience lauded the 35th president, enumerating the many instances which showed Kennedy’s capacity as a leader, including the Bay of Pigs invasion, the Cuban Missile Crisis and the Civil Rights Movement.

Several spoke of Kennedy’s seemingly boundless optimism, an image of youth and heroism which they said he carefully cultivated with the help of television and the media.

Others described Kennedy as a social crusader, including two African students, who separately described the almost godly stature he has achieved in their native countries. Some members of the audience also characterized Kennedy as a war hero who applied the same compassion in foreign affairs as he dedicated to the Civil Rights Movement.

Few if any of the student’s remarks were critical, and most praised Kennedy’s ability to set a positive, uplifting tone for the entire nation.

The specter of Vietnam arose in a number of audience members’ comments, but criticism on that count was muted as well.

Anna Holt, a junior from MIT, argued that there was a shift in Kennedy as his presidency progressed, describing him as a “politician who made the transition to a statesman.”

Many members of the audience said that Kennedy has come to symbolize an image of glamour, so that he’s more admired now for his inspiring, idealistic speeches than for specific policies.

After milking the audience for their views and opinions, Donahue turned to the members of the panel to address the same questions about Kennedy’s identity and legacy.

“I don’t think Kennedy would have escalated the war [in Vietnam] as Johnson did,” said Dallek, adding that he believed the next president to reintroduce the kind of “moral fervor” exemplified by Kennedy was likely to be a woman. This comment met a long round of applause from the audience.

“I’m not sure Kennedy would be elected today,” Gillon said. “We are too cynical to see his optimism through a haze of other issues concerning his private life.”

Towards the end of the session, Sorensen rose from his private booth above the audience.

“This has been extraordinary,” he said. “I am impressed with the number of students whose knowledge of Kennedy is dead on.” But he added that some on stage and in the audience didn’t “have it quite right.”

Sorensen went on to describe Kennedy’s achievements in the area of civil rights and in quelling the threat of Communism on the international stage.

The audience, he said, wasn’t as familiar with the context of the Kennedy presidency as those who lived it.

“The audience [can’t] understand that 40 years ago, the world lived on the brink of nuclear destruction. We experienced 13 of the most dangerous days in the history of the world,” said Sorensen. “Kennedy stood cool and calm, and because of him, we’re still here to talk about it.”

Sorensen also took the opportunity to blast the Bush administration, contrasting Bush’s use of power with Kennedy’s diplomacy.

“Kennedy was a firm believer in the U.N.,” said Sorensen. “With the help of Muslim, Catholic and secular countries, the United States would be much further along in this war on terrorism.”

After the panel wrapped up and the red “on air” light shut off, students lined up to get their photo taken with Donahue.

“It’s not every day that you have the chance to argue in front of Phil Donahue,” said Steve Kohart, a first-year at Babson College who heard about the session through his school’s Republican club.

For some though, the draw was less Donahue than the topic.

May, who said he wasn’t sure if he had ever watched Donahue’s daytime talk show but has appeared on the History Channel before, said the discussion was informative.

“I have a stronger sense now of the extent to which Kennedy has been an icon for our generation as well as yours,” May said.

“The Kennedy Presidency: History or Hype?” will air on the History Channel on Nov. 14 at 1 p.m. and 7 p.m. as part of a series of programs leading up to the Nov. 22 anniversary of Kennedy’s assassination.