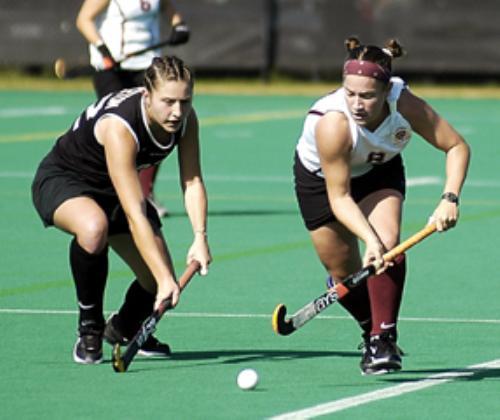 During Saturday’s momentous meeting between the last of the Ivy League unbeatens, something had to give.

Unfortunately for the No. 15 Harvard field hockey team, it was its hot streak—and not the intimidating history of No. 8 Princeton—that buckled under the pressure.

Dating back to 1999, Princeton hadn’t lost against an Ivy opponent in 29 games, but Harvard—who had just defeated No. 16 Boston College on Wednesday—came heartbreakingly close to preventing number 30.

With 11.9 seconds left, sophomore midfielder Jen McDavitt scored from deep in the circle, bringing the Crimson within one.

But on the following possession, a Princeton shot sailed high, allowing the clock to run down and quashing the comeback bid.

“Our mindset during those minutes was just to try as hard as we could to put the ball in the net,” tri-captain midfielder Kate McDavitt said. “It’s disappointing. We had our opportunities, our shots on goal, and they just weren’t going in. It’s frustrating. We gave everything we could possibly give at the end of the game.”

Indeed, the Crimson outshot the Tigers 18-10, with much of that offensive effort coming during the second-half rally.

“I think the mentality was just to push everyone up as much as possible and put as much pressure on their defense as possible,” junior midfielder Kate Gannon said. “We were trying to get into the circle and get as many scoring opportunities as we could. Unfortunately the second goal just didn’t come early enough for us to score again.”

The final sequence completed a roller-coaster contest that saw Harvard score first on an unassisted goal by senior forward Mina Pell before succumbing to three rapid Princeton drives—two of which came less than two minutes apart.

“Princeton basically managed to create confusion on their scoring drives and did a good job of converting on the opportunities that our breakdowns afforded them,” Gannon said.

Each time, a series of accurate Tiger passes led to penetration deep into Crimson territory, disorienting tri-captain goaltender Katie Zacarian and the usually stingy Harvard defense. Prior to the game, the Crimson had only surrendered four goals in the month of October.

“They got a couple of quick breakaways and caught our defense off-guard,” Kate McDavitt said. “That’s what ended up leading up to those goals. It’s unfortunate, really unfortunate, that we had lapsed for three or four minutes. You just can’t have lapses in the entire 70 minutes. You need to play hard the whole time.”

Now, with three games remaining in its season, Harvard looks make its final bid for an NCAA berth and prove that it belongs in the postseason.

The victory on Saturday, meanwhile, assures Princeton of at least a share of the Ivy crown, and the Tigers only need to beat Penn on Nov. 7 to clinch the outright title.

“We just have to pick ourselves back up,” Kate McDavitt said. “We need to win these last three games really big, just to prove that we deserve to be in the NCAA tournament and hopefully that will happen. Maybe we’ll even get a chance to see Princeton again.”