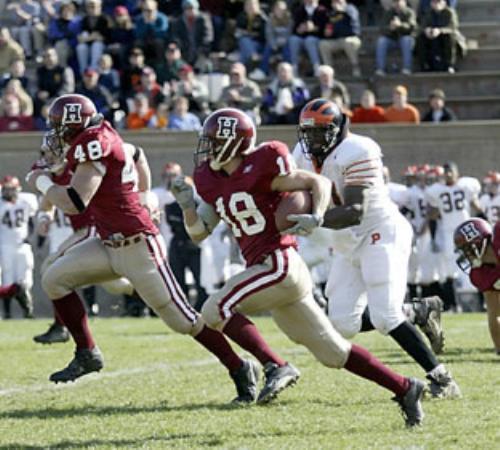 With the game’s final moments set to tick away, the Princeton kicker trudged onto the field, ready to put an end to his school’s inglorious streak of losing to Harvard.

After a clean snap and hold, the ball was on its way.

It is an image that is becoming all too familiar to Tigers fans. Twice in the past three years a Princeton team has exploded inside Harvard Stadium—threatening to disrupt a Crimson perfect season and to end its own agonizing streak of defeats at Harvard’s hands—only to implode on special teams in the game’s final moments.

In 2001, it was captain Taylor Northrup, widely considered one of the finest kickers ever produced by the Ivy League and a prospect for the professional ranks, who played spoiler for his own squad.

Down 28-26 with time about to expire, with the field goal attempt spotted at the 39, the kick went up but faded left in the swirling winds.

The only good news for the Crimson special teams unit Saturday was that Princeton’s was just as bad.

“Well, if you come to practice, we have the world’s best kickers,” Murphy said. “It’s just a different ball game in the game.”

Frustrated with the lack of success, Murphy sent Morocco out for a second try just seven seconds into the fourth quarter. A botched snap thwarted his chance at redemption.

With 6:52 remaining in the fourth, Morocco finally knocked one through to a standing ovation from Princeton and Harvard fans alike.

Senior kicker Adam Kingston booted two kickoffs out of bounds and freshman tailback Clifton Dawson allowed one that would have sailed out of bounds to hit him in the face mask, losing 25 yards in the process.

Kingston’s problems were not only of his own making.

Leaping high to field a high snap with less than five minutes remaining in the fourth quarter, the punter prevented a disastrous loss of yardage but managed just a 15-yard kick after a defender’s deflection.

The block set up the game-tying score—the second Harvard punt blocked in the game, both of which resulted in Tiger touchdowns.

But Princeton made its share of mistakes as well.

Kicker Will Simons knocked an extra point off the right upright with just over three minutes remaining in the first half, leaving the Tiger lead at two. Four minutes earlier he pushed a field goal wide right as well. His replacement, Javarone, fared little better.

On Harvard’s second-to-last play in overtime, the Crimson placed only 10 men on the field due to confusion regarding who should be on the field for the play.

Though having too few men on the field is not a violation of the rules, having just six men on the line of scrimmage—which Princeton alleges Harvard did—is.

“Oh yeah, I told the officials,” said Princeton coach Roger Hughes. “Yup, they missed it. The taste in my mouth just got a lot worse.”

The play, a rush by Dawson, gained just two yards. But had the penalty been called, the small gain would have been negated and the Crimson would have been pushed back five yards, possibly preventing the game-winning toss.

But by the time the officials had been alerted by the Tigers coaching staff, no action could be taken.

Senior cornerback Benny Butler sustained a cracked rib during the first half of Saturday’s game and was removed for the remainder of the game. His status for the rest of the season is yet to be determined.

With junior Gary Sonkur still hobbled by a high ankle sprain, both starting corners are now sidelined by injury. Senior Chris Raftery shifted from free safety to corner—which he played prior to this season—to fill the void opposite freshman Danny Tanner.

Sophomore running back Ryan Tyler, who had previously been sidelined with bruised ribs, succumbed to a case of food poisoning on Friday evening. Though he dressed for Saturday’s game, his participation was limited only to emergency circumstances.