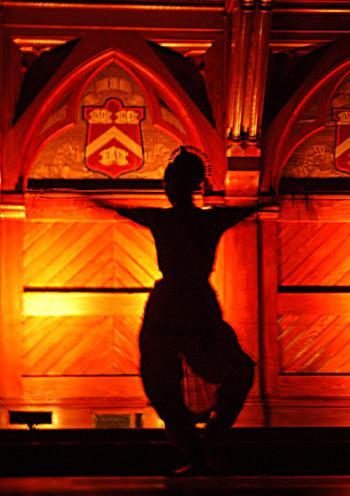 With a film about tattooing, renditions of traditional Scottish fiddle tunes and a rumba performed by ballroom dancers, Harvard artists displayed their diverse talents before a packed Sanders Theater audience on Saturday night.

Twenty-two different acts by students and groups displayed the variety of forms of artistic expression—film, theater, dance, music and studio art—in the performance, “Forte!,” which was sponsored by the Office of the President and the Office for the Arts.

Some segments celebrated unorthodox combinations of artistic media. One performance juxtaposed a video of spliced shots of prison cells with an original composition of techno music and a live dramatic dialogue.

Performers ranged from first-years to alumni who presented their senior theses for the visual and environmental studies department. The theses came in several forms, including a documentary film on wine-making in South Africa and a compilation of oil paintings depicting students making out in bars.

Collegium Musicum performed excerpts from Rachmaninoff’s “All Night Vigil” and Kuumba concluded the show with a traditional hymn.

Berenika D. Zakrzewski ’04, a music concentrator who performed a solo Chopin piece on the piano, said the night gave her the unique opportunity to share what she’s learned at Harvard with a broader community.

“I want to give back to Harvard some of what it has given me,” she said. Zakrzewski, whose piano performances have been broadcast on several television and radio networks across the country, said she believes that talent shows such as “Forte!” are important community-building events and help create a positive environment for the arts.

“I think people need to see how physical the arts are at Harvard,” she said.

University President Lawrence H. Summers, who some have said does not adequately prioritize the arts, originally suggested the idea as a sequel to “Segue!,” another talent show staged on the eve of his inauguration in 2001.

In an interview with The Crimson last month, Summers said that “Segue!” was “an extraordinary display from the Harvard arts community.”

“At the time, we had talked about it being desirable to do again,” said Summers. “I was involved in encouraging that this be done, and providing a small part of the funding, and expect to admire the performance, but I’m certainly not a producer.”

Director of the Office of the Arts Jack Megan headed up a panel of judges that selected the 22 acts. The final group of performers was whittled down over the past few months from a pool of nominees.

“We wanted to select the most talented students to represent the diversity of arts at Harvard,” said Megan. “What you saw tonight was the tip of the iceberg in terms of potential. We could easily have filled five programs just as phenomenal as this one. That’s how rich the student body is.”

In addition to his desire to give credit to the talents of individual students, Megan said the student body as a whole deserves more than an occasional performance.

“We desperately need more space and funding for the arts,” he said.

Brendan S. Millstein ’06, a saxophone player who played jazz melodies while two high school friends accompanied him with an interpretive dance and a poetry reading, said the night fostered a rare sense of camaraderie among Harvard artists.

“We had a chance to get to know each other while hanging out before the show,” he said.

Megan said he has cultivated a personal relationship with almost all of the student performers and it was gratifying to see them share their talents with one another.