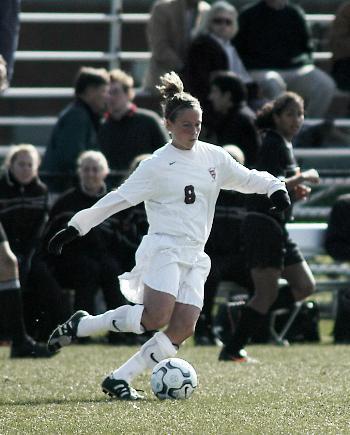 It’s been the same story all year for the Harvard women’s soccer team. One more great play or lucky bounce per game and the Crimson (5-4-5, 1-1-3 Ivy) would be in the midst of one of its best seasons in recent memory.

But that great play or lucky bounce has been elusive for Harvard, and neither showed up again in Saturday’s 1-1 tie against No. 24 Princeton.

Harvard turned in one of its best efforts of the season—taking an early lead against the talented Tigers (9-1-3, 3-1-1) and holding on for much of the game. But despite the quality play, the Crimson still couldn’t come away with a victory.

“Both teams played well and the match ended in a draw,” junior Alisha Moran said. “Unfortunately, we’ve seen this result too many times this season.”

Princeton’s Maura Gallagher made the play of the game, tying the score in the 69th minute. The Crimson defense appeared to have stopped Gallagher as she dribbled into the box, but she made a quick move, faked out a Harvard defender and fired a shot from the top left corner of the box past the outstretched arms of sophomore goalkeeper Katie Shields.

Until then, the Crimson had controlled the game after taking a 1-0 lead early in the first half.

In the 12th minute, senior midfielder Katie Westfall took a corner kick and found junior back Liza Barber, who headed it into the net. It was Westfall’s team-leading eighth assist of the season.

“We played well,” Harvard coach Tim Wheaton said. “We got a good early goal and created some good chances. It was one of those games that I don’t think either team missed a bunch of chances. Both teams had some decent chances but no unbelievable chances that they didn’t finish.”

One of the Crimson’s better chances to add to its lead came in the 23rd minute. On a three-on-one break, Moran controlled the ball on the right side of the field. But her cross floated out untouched for a goal kick.

Moran also had the best chance for either team in the two overtime periods.

In the first overtime, she got behind the Tigers’ defense, but had the ball knocked loose by a recovering defender just outside of the box before she could get a shot off.

The Crimson played with a mostly healthy team for the first time in quite a while. Co-captains Caitlin Fisher and Katie Hodel and senior Lauren Cozzolino, all recovering from injuries, played without showing any ill-effects.

“It was a good battle,” Wheaton said. “Based on our season, it’s frustrating we tied. If we had won some of the ones that shouldn’t have been ties earlier [in the season], we could’ve just said fair enough.”

Unfortunately for Harvard, the wins didn’t come then, so this result stings a little more.