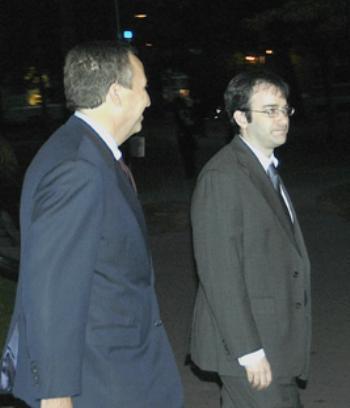 Though University President Lawrence H. Summers has plenty of experience developing economic models for complex policy debates, there’s at least one major optimization problem he can’t solve on his own.

No matter how many hours he spends in Mass. Hall, the former Secretary of the Treasury can’t supply the time that people at Harvard—and beyond—demand.

But behind the scenes, a team of aides is responsible for making sense of his dizzying schedule.

Wherever Summers goes, there they are: a chief of staff, a special assistant and a spokesperson among them.

And even they can’t fit everything in.

“He probably turns down about four times what he does in a day,” says spokesperson Lucie McNeil, who joined Summers’ staff in the middle of his second year.

These assistants have come to play an important role during Summers’ tenure, regularly interacting with top-level administrators and helping to coordinate the details behind University plans and events.

Dealing with the staffers—who are occasionally spotted handing Summers his trademark Diet Coke—has become a familiar routine for many people seeking input from Mass. Hall.

But two of the top aides who Summers hand-picked at the outset of his tenure have left the president’s office to pursue other careers.

And in their place Summers has hired two alums with experience in public service—one of his main educational priorities.

These aides, who often interact with Summers from dawn to dusk,

see a side of Harvard—and its president—that few others are privy to.

Stand By Your Man

Though some observers have said Summers’ management style makes him difficult to work with, his staffers say the daily interactions with him make their jobs worthwhile.

“The best part of my job by far was in the early mornings when I was at his house before we’d go to events, or in the car together and he would just want to talk about any subject that came to his mind and debate it. It was intellectually stimulating and engaging,” says Michael O’Mary ’99-’00, who served as Summers’ special assistant during the first two years of his tenure. “If we were going somewhere, I’d make sure I’d read the papers.”