School’s in for Summers

Harvard’s leader is principal for a day in Boston 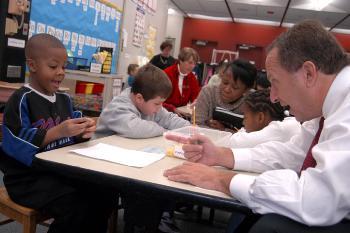 Excitedly, the former Secretary of the Treasury introduces himself to his captive audience: “Hi, everybody. My name is Larry,” he says methodically, stretching the “r” in his name. “And do you know what I do? I’m the President of Harvard. That means that I have a lot of students.”

As the University plans its expansion into its recently acquired 200 acres in Allston, Summers will have to haggle with countless community leaders on the other side of the River. But for now, he’s starting small.

“Now what are we learning today? Numbers,” he says emphatically to the group of six-year olds squirming around him. “And math.”

The classroom is familiar territory for Summers, who received tenure at Harvard in 1983 at the then-unprecedented age of 28. But Summers left Harvard’s halls behind yesterday—spending five hours teaching classes and meeting with teachers at the Jackson-Mann Elementary School in Allston—as part of the Boston Plan for Excellence’s Principal For A Day program. About 600 Kindergarten through 5th-grade students from 26 different countries attend the school.

And some of them greeted Summers with a rock star’s welcome.

“It’s him! It’s him!” one student screams out from a classroom as Summers passes by, oblivious to his newfound fan.

Back in Mrs. Keenan’s first-grade class, the world-renowned economist begins with the basics.

“That was too easy,” says Summers, an outspoken critic of grade inflation.

Shaking his finger, he takes another stab: “Okay, one more,” Summers says to the group “Which is more, six and four, or four and six?”

The rest of the class is silent, with puzzled looks on their faces.

Summers may have just taught them the basic principles of counting (they’ll have to wait a few years for econometrics), but the class has become restless.

“Larry, sit on your tushie! If it’s going to be tough for you to sit on your bottom,” Mrs. Keenan chides, “you’re going to have to leave the circle!”

Summers sits up, startled—until a glance around the room reveals that Mrs. Keenan’s warning was meant for another, smaller Larry (first grade is confusing for Harvard presidents, too).

The student beside him stops squirming, and Summers breathes a sigh of relief.

“Break time,” Mrs. Keenan says. “Time to get your wiggles out!”

The students stand up, gyrating their hips back and forth. “Touch the stars! Touch the ground, touch your toes!” Mrs. Keenan commands, as the kids reach up and then down, jiggling all their limbs about.

But as little Larry shakes his tushie, Summers remains grounded—after all, even if you’re principal for a day, you can’t wiggle your way out of the responsibilities required of a Harvard president.

Summers and his like-named neighbor pair off for the “Towers of 10” game.

As they take turns rolling dice and building “towers” of blocks from the results, a crowd of five other first-grade teachers looks on as part of a school program that fosters discussions of lesson plans and their efficacy.

“I know Larry Summers has been paying attention,” says the school’s real-life principal, Joanne Russell, who is also observing the class.

Summers looks at home, playing with blocks and using crayons to record their results, but his frame looks a little large for the child-sized wooden chair.

Afterwards, Summers meets with Keenan and the other first-grade teachers to discuss the class.

He asks about the students’ backgrounds.

“Some were very able to get themselves into the concept [of counting] right away,” Summers observes. “But others couldn’t.”

“What percentage of these students have parents at home who read to them, who give them dinner at a relatively stable time?” he asks.

Keenan estimates less than half; Russell less than 40 percent.

“Listen, because of my job, I can say things about education in public forums,” Summers says. “What is the one thing that you want people to know about Boston Public Schools?”

It’s not just about the schools, the teachers respond, stressing the impact of students’ backgrounds and level of parental support on dealing with education problems.

Summers also visited a special-education class for autistic children, taught a third-grade class about literacy using word puzzles and engaged a fifth-grade class in a discussion about graphs as a tool for analyzing data—expanding his fan base throughout the day.

One student was so enthusiastic after Summers showed his fifth-grade class how to plot the relationship between two variables—grades and number of days absent, growth of a plant and amount of sunlight and height and weight—that the student pulled Summers by the arm over to the blackboard and showed him a “tree graph.”

Summers was one of 55 Boston-area leaders who spent the morning in various Boston schools in yesterday’s Principal For A Day program.

“The Boston schools have a terrible reputation. We wanted to get as many people as possible to see them, and to see what the principal’s job is like,” explains Ellen Guiney, executive director of Boston Plan for Excellence, the organization which sponsored the program. “We wanted to dispel the myth that it is chaos, that nobody knows what they are doing.”

At the end of his day on the other side of the River, Summers says it was well worth the time away from Mass. Hall.

“Everyone in a position of leadership should spend some time in a public school,” Summers says. “It will change their outlook.”

And it will wear them out.

“Doing this everyday, with this many kids,” Summers says, gesturing to a buzzing classroom full of children, “is a lot, a lot harder than my day job.”

—Staff writer Lauren A. E. Schuker can be reached at schuker@fas.harvard.edu.