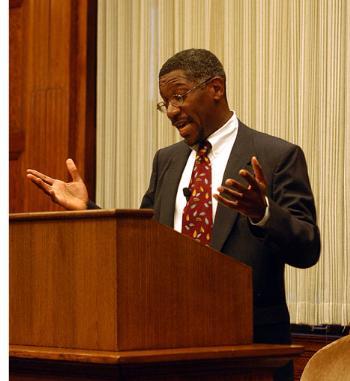 GERARD L. EARLY, a professor at Washington University in St. Louis, speaks about race in sports at the Barker Center last night.
By Kimberly A. Kicenuik, Crimson Staff Writer

Sports are a national pastime—and a litmus test—revealing cultural trends in America according to a cultural critic who spoke at the Barker Center last night.

Gerald L. Early, a professor at Washington University in St. Louis whose cultural commentary has appeared in The New York Times and other major national media, spoke in the first installment of this year’s three-part Alain LeRoy Locke Lecture Series.

“Sports are a great deal, socially and psychologically, like fine art in this culture,” he said. “They are live narratives, intensified by the uncertainty of outcome, that say a great deal about what it means to be human and what we value.”

The Barker Center’s Thompson Parlor echoed with a heated discussion of race, equality and athletics yesterday, as Early read his most recently composed essay entitled “The Next Level: Race, Sports and Affirmative Action in the United States.”

Limbaugh came under fire when he described McNabb as an overrated black athlete in a Sept. 28 broadcast of ESPN’s pre-game show “Sunday NFL Countdown.”

The network fired Limbaugh from his job as a commentator for the show the same week.

According to Early, who studied several articles surrounding the controversy and McNabb’s reaction to it, the incident exemplified the ability of sports to reveal social and cultural context in America.

“ESPN hired Limbaugh to suggest that football had some wider meaning beyond the obsession of the passionate fan,” he said. “His political opinions themselves signify social commentary of some sort or another.”

Limbaugh’s remarks, according to Early, point to deeper-seated racial attitudes that fail to give some black athletes their due credit.

Although statistics suggest McNabb’s on-field performance is average, Early argued that McNabb plays an important role as a strong leader of his team that cannot be quantified.

He also spoke more generally about the political and social implications of sports.

“Who plays high-level sports has as much meaning as how well they play,” he asserted.

At the end of his remarks, Early observed that the inherent inequality of athletic competition further complicates racial tensions on the playing field.

Early has been a faculty member in the departments of English and African and Afro-American Studies at Washington University since 1982. He has also authored five books on blacks in America, one of which won the 1994 National Book Critics’ Circle Award for Criticism.

And he was honored twice with Grammy Award nominations for Best Album Liner Notes in 2001 for “Rhapsodies in Black: Music and Words of the Harlem Renaissance,” and in 2000 for “Yes I Can: The Sammy Davis, Jr. Story.”

Early closed his lecture by telling the audience that he hopes his writing will serve as a springboard for the discussion of broader racial and cultural issues.

“One of my reasons for constructing this essay about sports is that it brings together issues much larger than athletics, highlighting in particular racial insults in America and the way people react to them,” Early said.

He will give two more lectures today and tomorrow in the Thompson Parlor, focusing on the significance of Jackie Robinson and Curt Flood.