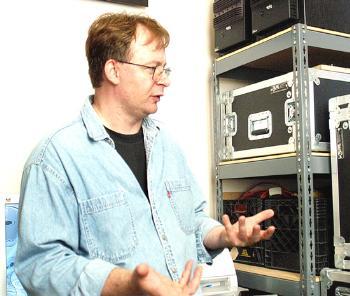 Harvard’s weathered buildings may seem most suited to stodgy music from centuries gone by—but in one of its distant corners, futuristic electronic tones echo unassumingly from the ivy walls.

Those who trek to Paine Music Hall find a world beyond the usually-conservative offerings of the Music Department: the rare, world-class and often underutilized resources of the Harvard University Studio for Electroacoustic Composition (HUSEAC). The newest incarnation of the Harvard Electronic Music Studio—founded in 1968 by Leon Kirchner and Morton Subotnick and augmented by Tcherepnin in 1972—is a sight to behold, and to hear. And it’s all there for the taking by undergraduates.

“Presumably, any student could [ask] the Associate Director for access for a project,” says studio manager Ean White.

The quiet nook packs an impressive array of equipment and instruments. From some of the earliest analog modular synthesizers ever built to ultra-modern ProTools programs—used for digital audio production—the studio has advanced capabilities for recording, all at students’ beck and call.

Realistically, however, only a handful of undergraduates have any idea how to use this equipment. Actually making music with the technology requires intensive training to figure out which knobs create which warbles.

The music department at Harvard is often criticized for its rigid curriculum, based largely on classical music. Amidst myriad courses on bygone musical genres, the twelve-student class Music 167r, “Electroacoustic Composition,” seems slightly out of place.

“We’re not a technical school,” says White in response to some students’ frustration when they cannot learn the skills needed to create sophisticated recordings. “This is a school for composition.”

According to White, the course was not offered last year due to a faculty shortage within the department. He says the department lacked a professor with the free time and experience to teach a course on this sometimes-elusive field of music. This year, the course returns under the instruction of Professor of Music Eric D. Chasalow, visiting from Brandeis University.

But the music department’s commitment and enthusiasm for this course remains tentative, with Chasalow’s Harvard position only a temporary solution to much broader problems for an exceedingly popular course.

One difficulty arises because of the rare instruments that the studio houses—White says some of its synthesizers can be found in only a limited number of locations around the world.

Use of the studio requires not only a mastery of these synthesizers, but an extensive knowledge of the possibilities offered through the technology of ProTools, and White says very few are qualified to teach others these requisite skills.

But the Music Department nonetheless made use of the studio during the course’s brief hiatus, allowing graduate students in the department to use the facility. White says the department used the downtime to grant residencies to electronic sound artists Keith Fullerton Whitman and the band Matmos.

With the course’s return comes renewed popularity, though not as great as in previous years.

“There’s an enormous interest on the part of the students,” according to White.

This year 35 students applied for spots in the twelve-person course. This is down from around fifty applicants just two years ago when the class was offered regularly. Still, the interest remains high for a class with prerequisites in such a small department.