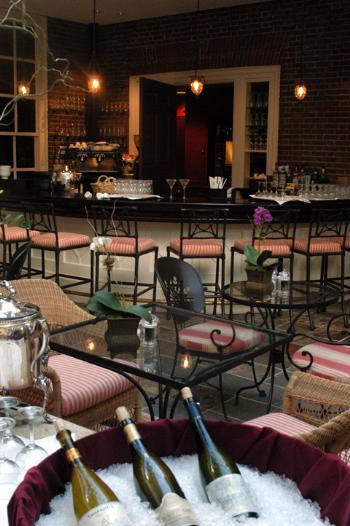 The newly-opened bistro at the Faculty Club will serve up drinks and lighter fare for hungry connoisseurs.
By Joshua P. Rogers, Contributing Writer

There is a new dining option on campus for those who relish a stiff Martini and hot hors d’oeuvres in the afternoon—but entry for most comes only with a membership fee of at least $150.

After two years of renovations, the Harvard Faculty Club opened a new bistro yesterday morning to cater to patrons in search of lighter and faster fair during the day and drinks during the evening.

The Conservatory offers a dining choice which bridges the gap between the Club’s formal Dining Room and the casual Theatre Room, Club Director June Cuomo said. The restaurant’s official grand opening is scheduled for next Wednesday.

Before designing the bistro, Cuomo travelled to the West Coast to investigate the methods of California Cuisine figure Alice Waters, whom she refers to affectionately as “the guru of organic food.”

The meals served at the Conservatory incorporate many of Waters’ ideals—and some even crib from her menu.

“The Conservatory is a philosophy as much as it is anything else,” Cuomo said.

Waters, who consulted with Yale University during that school’s recent effort to revamp their dining services, seemed enthusiastic that Harvard was catching on.

“I’m very interested to see what ingredients the restaurant has chosen to use. I would hope they are grown someplace local and that they use only ingredients that are in season,” Waters said.

What sets the Conservatory apart from the Club’s other dining options however, is the presence of a full bar.

“I wanted a bar—which ought to be part of a university, which the Faculty Club has not had for many years” Cuomo said.

The bar is stocked with beers on tap as well as numerous liquors. Six wines—three red, three white—are available each week, selected from Wine Spectator’s wines of the week list. In addition, the bar serves the Conservatory’s two specialty drinks, The “Harvard Yard” and the “Radcliffe Cooler.”

The restaurant is open for breakfast and lunch daily, with desserts and drinks served at its bar until after dinner finishes in the Club’s other dining rooms.

Those looking for a top-quality cup of coffee in the morning will not be disappointed—Cuomo purchased the same espresso machine and uses the same organic coffee beans that Waters uses at her Cafe Fanny in Berkeley, Calif. A mixture of warm and cold dishes accompanies the selection of coffees and teas at breakfast.

Lunch consists of a choice of three cold dishes, one hot plate, a warm quiche, and a homemade baguette sandwich. All the offerings change daily and are chosen by chef Michael Brentana. The mid-day repast also includes Brentana’s famous French onion soup—which he prepares himself daily.École Le Notre, make an assortment of desserts available throughout the day.

The Faculty Club serves meals to approximately five hundred people every day and boasts 4,500 members who regularly use the club’s facilities, according to Heinrich Lütjens, general manager of the Club.

On the day of its opening, though, the Conservatory was mostly empty. Its wicker chairs sat unused and its impressive floral displays went unadmired during until the evening, when a few faculty and alumni filtered in from the main dining room.

“I love the atmosphere,” John J. Brown, former Director of the Office of Planned Giving said. “It’s a bit noisy but a lovely spot.”

Cuomo said she is confident that The Conservatory will become a popular dining alternative.

“The faculty doesn’t know about it yet,” Cuomo said, “We’re just putting our feet in the water.”

The pastry chefs, educated at France’s