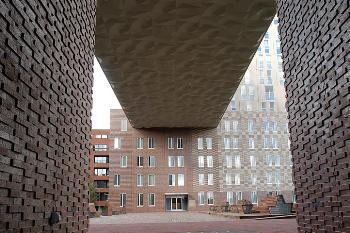 Snap, Yo’ Momma’s Uglier than One Western Avenue

The decades-long debate over whether Mather House or the Leverett House towers holds the dubious distinction of being the ugliest
By Stephen M. Fee

The decades-long debate over whether Mather House or the Leverett House towers holds the dubious distinction of being the ugliest residence on campus may have just been settled once and for all—thanks to the opening of One Western Avenue, Harvard’s newest, and perhaps most hideous, graduate school housing unit.

Located on the Allston side of the Charles adjacent to Harvard Business School (HBS), One Western Avenue, in all its boxy, Ikea-like glory, creates a courtyard bordered on two sides by low-rise units, on one side by an 18-story high-rise unit and on another side by the river. A three-story wing spans, bridge-like, over the central courtyard, yielding excellent views of the river and neighboring Cambridge.

The Boston Herald calls the design “risk-taking.” The Boston Globe calls it “aggressively dull, blocky, and abstract” with nothing to indicate the “joy of human habitation.” The New York Times calls it a “distinctive example of progressive contextualism.” Anupam Mishra, a second-year HBS student, calls it “the ugliest thing since Canaday.”

For the 365 residents of One Western Avenue—or at least those FM informally polled—there indeed seems to be consensus about the merits and drawbacks of their new home. The view of the river: spectacular. The view of the building: not as spectacular. “There are great river views on one side,” says Adriana M. Boden, second-year HBS student and a resident of One Western Avenue, “and great parking lot views on the other.”

While not every resident of One Western Avenue enjoys its spectacular river views, each and every resident, and every innocent passerby for that matter, is subjected to the building’s exterior. Flat and Spartan, the building’s face is decorated only by different sized windows in a seemingly random pattern and bricks of varying color and texture. Residents tended to outdo the critics in their creative assessments of the building, some commenting that it resembles “a hospital,” “a prison,” “a psychiatric ward” and “something from Atlanta.” Others noted that it was “out-of-place,” but also very “clean-looking” and “nice.”

The building complex, which brings Harvard closer to its goal of housing 50 percent of its graduate population, was lauded by the University’s official publication, the Harvard Gazette, as “a thing of beauty.” The Mayor of Boston, Thomas M. Menino, even said that the structure would stand as a “landmark” of how Harvard and Boston might work together as the University continues to establish itself on the other side of the Charles.

Machado and Silvetti Associates, a premier Boston architectural firm, designed the building. Rodolfo Machado and Jorge Silvetti are both professors at the Graduate School of Design. Though both men are hailed as brilliant, creative architects, their new creation continues to receive mixed review from the press and from its residents.

But whatever you think of the Bauhaus-meets-Brady-Bunch style of One Western Avenue, you have to give credit where credit is due. “It’s nice and new,” says Boden, “and my apartment has the most windows I’ve ever had.”

But, as residents of Quincy House, the Leverett towers, Mather House, Canaday Hall, Peabody Terrace and Currier House can attest, novelty can only carry a building for so long.