Four parties get $100 each in first week of initiative 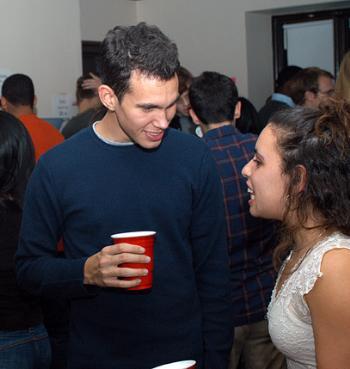 KYLE E. SCHERER ’05 drops the H-Bomb on a Tufts student at a Undergraduate Council-funded party Saturday night in Adams House. The Council will continue to fund parties throughout the semester.
By Ebonie D. Hazle, Crimson Staff Writer

This weekend, the weather outside turned frigid, but inside four rooms the atmosphere was sizzling thanks to the Undergraduate Council.

Each of those gatherings—three hosted in the Quad and one in Adams—will receive $100 from the council, as part of a first-ever program to fund students’ room parties.

“From what I heard everyone had a lot of fun and things went smoothly,” council President Rohit Chopra ’04 said. “We’ve been getting a lot of positive feedback. People realize that throwing a party is expensive.”

A party held in Adams F-32 was already crowded a little after 11pm.

Hostess Rebecca L. Lambert ’05 said that she was already planning to throw a party for her friends, but decided to take the council up on its offer.

The hosts will not receive the $100 until after they present their receipts to the council.

“It would be a really big help if we could get funding. We would be able to do this a lot more often,” Lambert said.

Lambert said that she spent a lot of money on the festivities, which featured upbeat pop music.

“We also had the obligatory chips and salsa,” Lambert added.

In order to receive council funding, the hosts had to fill out an online form and post an invitation over their House’s email list.

At least 50 people had to attend the party in order to receive funding as well.

The Adams party had no problem getting the requisite number of attendants, which may have been partly due to the obligatory advertising clause in the council party funding rules.

“We are a little worried about it getting crowded later. But I don’t know how many people go to random parties that are announced on their house list,” Lambert said.

The crowd got better-acquainted at a rowdier, raunchier party hosted in Pforzheimer’s Comstock 403—which featured a beer bong hanging from the room’s second floor while hip-hop tunes kept the sweaty crowd moving.

Attendants were pleased with the bumping beats and the booze.

“I love the fact that the UC is finally getting involved in the party scene,”

Although he was standing quietly in the corner, Lohitsa said he was really enjoying the party or at least the view from his side of the room.

“Its a sausagefest,” he said, commenting on the highly-male composition of the party.

Party-goers echoed the success of the Pfoho party.

“I had a good time,” Tom C. Gilmore ’06 said, adding that he was glad that the hosts would be receiving funding from the council.

“I think its a good idea. More parties will be able to happen,” Gilmore said.

—Staff Writer Ebonie D. Hazle can be reached at hazle@fas.harvard.edu.