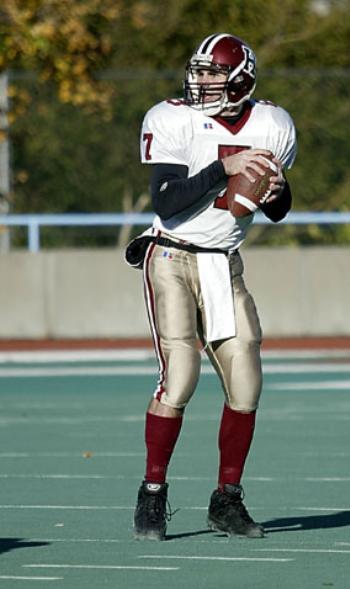 Backup quarterback GARRETT SCHIRES completed just two passes in the second half and none in the fourth quarter of Saturday’s loss. Columbia’s secondary held Schires to just 88 yards passing.
By Timothy J. Mcginn, SPECIAL TO THE CRIMSON

Though the junior signal caller had struggled mightily against Columbia’s statistically woeful secondary, with the clock ticking down in the fourth quarter, all Harvard needed to do to escape from Manhattan with a victory was to pound the ball on the ground for a first down. But with Harvard’s intentions clear to all, the Lions shut down tailback Clifton Dawson setting up third-and-six—and Schires’ uncharacteristic lapse in judgment.

“I think the bottom line is we knew we were gonna get man coverage and our thing is throw it to ‘my guy or no guy,’” Harvard coach Tim Murphy said, “meaning that if the coverage is [strong] throw it away and let’s kick the football.”

But Schires faded back in the pocket and, despite strong coverage on his primary options, fired a pass towards junior wide receiver Brian Edwards and into heavy traffic. Columbia cornerback Prosper Nwokocha jumped into the throwing lane and snagged the Lions’ third interception of the season, returning the ball to the Crimson 45-yard line with 2:03 remaining.

“We had struggled throwing the football but we’d done a pretty good job to not give them any short-field opportunities by turning the ball over,” Murphy said. “We just gave it away at the most crucial moment.”

When quarterback Jeff Otis found wide receiver Zach Van Zant in the endzone just 55 seconds later to put Columbia up 16-13, Schires abandonment of his conservative style and poise in pressure situations began to close the lid of the coffin on Harvard’s season and chances of an Ivy title.

With the clock ticking down and just 30 seconds to go, Schires heaved a prayer over the heads of his receivers on second-and-one and into a swarm of baby-blue jerseys. Once again, Nwokocha was there, pulling down his second interception of the game—equaling the Lions’ total for the entire season prior to Saturday.

In a span of 85 seconds, Harvard fell from almost certain victory to guaranteed defeat.

But the Crimson’s offensive failings extended well beyond poor play in the final two minutes of the fourth quarter.

As he has in each of his four starts in place of injured starter Ryan Fitzpatrick, Schires was slow to find his rhythm in the first quarter, completing just three of his eight attempted passes. But he has always recovered to find his groove.

A beautifully lofted touchdown strike to junior wide receiver Brian Edwards in the left side of the end zone with 49 seconds remaining in the first quarter looked as though it would knock the stagnant quarterback back into action.

This time, however, it didn’t.

Though an energized Schires temporarily roused himself from playmaking lethargy in the second quarter, completing five of eight passes and leading Harvard to a seven-point halftime lead, he was completely incapable of accomplishing much of anything against the worst Ancient Eight secondary in the second half.

Completing just two-of-11 passes in the final two quarters, Schires’ ineffectiveness allowed the Lions to overload the box against Dawson, cutting his productivity by half.

In return, with Dawson unable to make any inroads into the Columbia defense on the ground, Schires continued to force passes into tight coverage, throwing balls behind and over the heads of receivers. Though he threw only two interceptions, had the Columbia defensive backfield been any stronger, the total could easily have been three times as many.

With Schires’ poor play slowing the Crimson offense, Murphy’s formerly high-flying attack managed just those 13 points—none of which were scored in the final 42:43 of the game.

The most proficient offense in Division I-AA was shut out for nearly three consecutive quarters by one of the worst defenses in the nation.

“I think the bottom line is that we, today more than any other day I can remember in years, we really struggled to throw the football,” Murphy said. “There’s no excuse. Whoever’s healthy and ready to go, we’ve got to get it done.”

And in the three weeks prior to Saturday’s debacle, Schires had done exactly that. He’d gotten it done, particularly in leading the Crimson to victory over Lafayette and an overtime triumph over Princeton.

He just didn’t show it on Saturday.

The result may have changed in a New York minute, but for Garrett Schires and the Harvard offense, things got strange early and stayed that way.