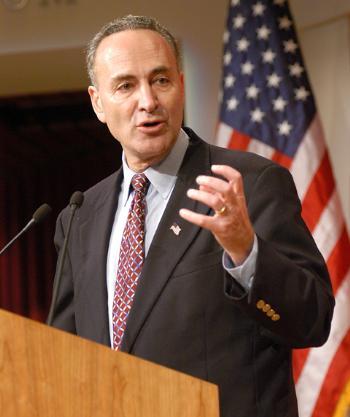 Nominees to the Federal bench should be expected to answer questions about their judicial philosophy and their stance on particular issues before they are confirmed, Sen. Charles E. Schumer ’71 told a JFK Jr. Forum crowd Friday.

Schumer, D-N.Y., has exerted great influence over the approval of federal judges nominated by President Bush as a vocal member of the Senate Judiciary Committee—inciting a torrent of virulent partisan debate.

The Left has praised Schumer as an unflagging fighter for moderation in the judiciary, while the Right derides him as a subverter of the Constitution and the democratic process.

On Friday, Schumer echoed and intensified the message of a controversial June 2001 New York Times Op-ed, where he argued that the Senate should consider appointees’ ideology as part of “its responsibility to advise and consent.”

“I really despise ideologues,” Schumer declared before announcing his intent to “prevent hard-right ideologues from taking over the bench.”

Schumer said he considers three criteria when looking at a nominee: legal excellence, ideology and diversity. With respect to ideology, he added that judges should be moderate and aim to interpret rather than make law.

While President Bush’s nominees have exhibited legal excellence and diversity, “it’s on ideology that [Bush] is an abject failure,” Schumer said.

He accused “the hard-hard right” of trying to use the “unelected branch”—the judiciary—to enact its agenda, having failed to do so through Congress and the Presidency.

Schumer praised Democrats for their “amazing courage” in carrying out the controversial filibuster of judicial nominee Miguel Estrada, who was being considered for a position on the Court of Appeals for the District of Columbia.

Estrada was criticized by the left when he refused to answer the Senate Judiciary Committee’s questions about his position on several issues, arguing that he did not want to discuss topics he would likely face if confirmed to the bench.

Reclining, shoe-less on a couch following his speech, the man introduced as “tenacious, unquenching, tough” declared that he does believe or rely on issue-based litmus tests. Schumer noted earlier that he has approved 148 of the 159 Bush nominees for the Federal bench.

While Schumer has been hailed by liberals, his stance has earned him a firestorm of criticism from the right.

Brian C. Anderson, an editor at the Wall Street Journal, wrote that Schumer has “wrought incalculable damage to our political fabric” through efforts to “subvert the criteria by which the Senate chooses the Judiciary.”

And Harvard Republican Club spokesperson Mark T. Silvestri ’05 accused Schumer of undermining the system of checks and balances, adding that a majority of senators were prepared to confirm Estrada.

“It’s obvious that a solid majority of U.S. senators support the confirmation of these judges that Bush has appointed,” he said.

Silvestri, who did not attend Schumer’s speech, said that senators should consider not ideology but rather the ability to act as “fair arbiters between parties.”

He said he worries that dragging ideology into the confirmation process will lead to an “increased polarization of politics.”

“If [Bush] nominates someone who is way over and who is hard-right, he should expect the fight of his life,” he said.

“I’m not so sure that it would’ve been better to do nothing, but we should’ve done it in a multilateral way,” he said of American involvement in Iraq. “The only way we’re going to solve this problem is by going back to the UN.”

He criticized fellow Democrats who refuse to support a proactive foreign policy without offering an alternative source of national security.

“I frankly don’t think Howard Dean can win the presidency unless he says what he will do in response to 9/11, not just criticize President Bush,” he said.