Costly interception sets up second loss to an Ivy weakling 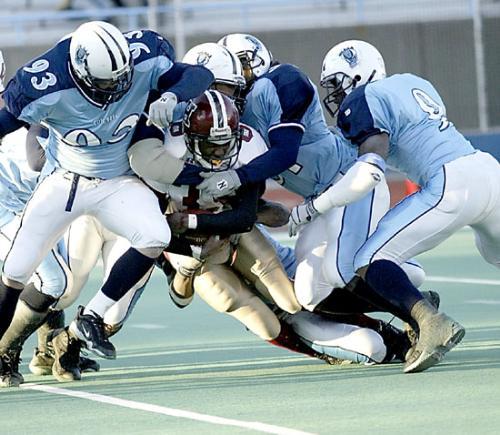 Freshman tailback CLIFTON DAWSON, along with the rest of the Harvard offense, was shut down by the Columbia defense in the second half of Saturday’s 16-13 upset loss. The Crimson gained just 262 yards of offense, half its usual output.
By Lande A. Spottswood, SPECIAL TO THE CRIMSON

NEW YORK, N.Y.—With less than two minutes standing between the Harvard football team and an Ivy title showdown with Penn, the Crimson threw away its chance at a championship.

Clinging to a 13-9 lead, No. 23 Harvard faced third-and-six at the Columbia 41-yard line and needed only a single first down to clinch the victory.

But junior quarterback Garrett Schires—who struggled all afternoon—fired his next pass straight into the arms of Lions defensive back Prosper Nwokocha, who returned the ball to the Harvard 45 to set up the game-wining score.

After a desperate last minute drive ended with Nwokocha intercepting Schires again, the Lions (3-5, 2-3 Ivy) danced on the sidelines celebrating their biggest win of the season, while Harvard (6-2, 3-2)—reeling from its second-straight loss to an Ivy weakling—was left to wonder what went wrong.

“The bottom line is, Columbia made the plays when it had to,” said Harvard coach Tim Murphy. “That’s why they won the football game.”

An overdose of injuries to Harvard helped the Lions out quite a bit as well.

Without the trio, the Crimson passing game was horrible.

Against a unit ranked dead last in the league in total defense, scoring defense and passing defense, Harvard could muster only 88 yards through the air.

“Today more than any day I can remember in years, we really struggled throwing the football,” said Harvard coach Tim Murphy. “How much of that was missing Rodney and James and Ryan, I don’t really know, but there’s no excuse. Whoever’s healthy has got to get it done.”

Columbia jumped out to an early 6-0 lead, when it marched 66 yards downfield to score on the game’s opening drive. Lions quarterback Jeff Otis completed four-of-four passes for 64 yards before tailback Ayo Oluwole capped the drive with a one-yard TD run.

But that would be the Lions’ best drive of the day.

The Harvard defense—coming off a poor performance in a 30-16 loss to Dartmouth last week—regrouped quickly and smothered the Lions for most of the game. In the first half alone, the defense intercepted Otis three times, twice leading to Harvard’s only scores of the day.

After an Adam Kingston punt was partially blocked with six minutes remaining in the first quarter, the Lions took over at their own 48-yard line. But that Columbia drive quickly came to an end.

After a monster sack by senior defensive end Brad Payne set up a third-and-18 at the Harvard 42-yard line, Otis forced a pass into coverage and was intercepted by junior cornerback Gary Sonkur at the 20-yard line. Sonkur—who often returns kickoffs for the Crimson—returned the interception all the way to the Columbia 45-yard line.

Working with a short field, Harvard posted its first scoring drive of the day, highlighted by two catches by junior wide receiver Brian Edwards. First, with Harvard facing fourth-and-10 on the 33-yard line, Edwards caught a five-yard pass from Schires, turned upfield and beat the defenders to the first down marker. On the next play, Schires found Edwards in the left corner of the endzone for a 19-yard TD pass.

Harvard’s second scoring drive was set up by an interception by junior linebacker Bobby Everett.

With time running down in the first quarter, Otis darted a pass to tight end Wade Fletcher. Fletcher was blanketed by senior safety Chris Raftery, who tipped the ball out of his hands. Fletcher bobbled the pass and fell to the ground, kicking the ball as he went down. Everett snatched the ball out of the air to give Harvard possession at the Columbia 37-yard line.

“The first drive we really struggled, but after that we played our tails off,” Murphy said. “I felt terrible for our defensive guys.”

Dawson carried the ball eight times in nine plays as the Crimson chugged into the endzone for the go-ahead touchdown, a one-yard Dawson plunge with 12:43 remaining in the first half. It would be Harvard’s last score of the day.

“We held the No. 1 offense in the country—these guys came in averaging over 500 yards—to 260 total yards,” said Columbia coach Bob Shoop. “[The Columbia defense] deserves to be commended.”

Dawson finished the day with 159 yards on 32 carries, but struggled in the second half when the Lions defense began keying on the run. With the passing game limited, Dawson was hit several times in the second half immediately after receiving the handoff, averaging only 3.5 yards per carry after halftime.

With Harvard leading 13-6 in the third quarter, the Lions put together their longest drive of the day, a 90-yard march that began at their own eight-yard line. A 17-yard completion to Fletcher set up first-and-goal at the seven, but the Harvard defense stuffed two rushes and Sonkur broke up a pass to keep Columbia out of the endzone.

A 19-yard field goal by Nick Rudd with 3:52 remaining in the third quarter pulled the score to 13-9.

The Harvard loss, coupled with a Yale loss to Brown, clinched for still-undefeated Penn at least a share of the Ivy title with two weeks remaining. It also transformed a highly-anticipated Harvard-Penn showdown into a game that will have virtually no chance at affecting the Ivy title race.

“We have no choice but to regroup, stick together and move on,” Murphy said. “That’s all we can do.”