Where It All Be Gins: Senior Quintet Goes Above And Beyond For W. Soccer 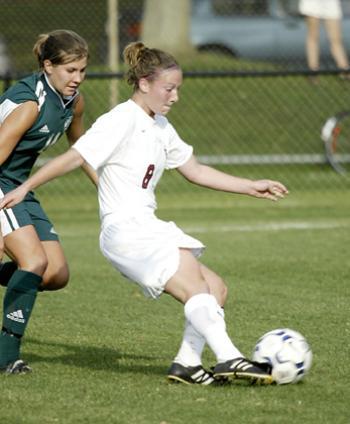 Senior midfielder KATIE WESTFALL (8) moved into a tie for second place on Harvard’s career assists lists by setting up both goals in her final collegiate game, a 2-1, double overtime win at Columbia on Saturday.
By Alan G. Ginsberg, Special to the Crimson

NEW YORK, N.Y.—Sophomore Sara Sedgwick cheated her five senior teammates out of the last four minutes of their careers on Saturday.

Of course, they probably didn’t mind.

When Sedgwick’s header crossed the goal line in the 106th minute, the Crimson had its first win in seven overtime contests this season. In that instant, co-captain center back Katie Hodel, co-captain left back Caitlin Fisher, right back Lauren Cozzolino, midfielder Katie Westfall and striker Alisa Sato ceased being the heart of the Harvard women’s soccer program. Now, they’re just alums.

For a while, it seemed the senior class wanted to hang on as long as it could, as Harvard’s last three games went to double overtime.

Now that the quintet is gone, it may be the underclassmen wishing the season could have been dragged out just a little bit longer.

Westfall’s performance on Saturday was perhaps the most spectacular. She took the corner that Sedgwick finished, recording her second assist of the game and the 32nd of her career, tying her for second in school history. Not that she should have even been in uniform.

“She shouldn’t have been on the field today,” Harvard coach Tim Wheaton said. “She’s hurt. She got her knee hurt [Oct. 25] against Princeton. I asked her today, ‘How are you feeling?’ She goes, ‘Good.’ I said, ‘If your leg was falling off and I asked you, what would you say?’ She said, ‘I’d say, ‘Good.’’ Because she was going to play today because that’s her attitude.”

It’s that kind of toughness that this senior class—for which nothing came easy—embodied. In addition to Westfall’s recent injury, Fisher rushed back from a badly injured right ankle when her team still had postseason aspirations and didn’t seem quite right even on Saturday, when she still sported layers of tape on the joint. During Fisher’s absence, Hodel had to get stitches in her bottom lip after a 6-0 win on Oct. 15 over Holy Cross.

And those were just the relatively short-term injuries. Sato missed her entire freshman campaign with bilateral stress fractures in both shins. And then there’s Cozzolino, who has battled compartment syndrome her entire career.

But despite the injuries, this quintet still left us with scores of lasting, bittersweet images of plays they’ve made countless times—lasting, because they’re imprinted on our minds; bittersweet, because they’ll never happen again.

Never again will Westfall charge at the defense—the field general ever in control—and slip a pass that no one else in the stadium ever even thought of—never mind saw—behind the defense.

Never again will Hodel—who always seemed to be scrambling and contorting her body in impossible ways to get a foot in and poke the ball away from an attacker—make that key tackle to save and energize her team at the same time.

Never again will Fisher—who made the left flank her own for four years—fly down the side of the field and unleash a precision cross into the box.

Never again will Sato—who scored the first goal on Saturday just 95 seconds after the Crimson had fallen behind 1-0—turn and hopelessly tangle a defender’s legs with her deft displays of skill.

And never again will the quiet, steady Cozzolino leave the field after another mistake-free game, already forgotten by the fans, who nonetheless can’t seem to figure out why Harvard’s opponents didn’t get much offense going down their left side of the field.

Everyone, it seems, has his or her own memories.

“I don’t know if you’ll ever see a harder player than Katie Hodel stepping up and winning balls, someone as determined as Lauren Cozzolino, as quick as Spanky [Sato],” Wheaton said. “And Bobby—Caitlin Fisher—playing hurt all year, athletic as anything and then Katie Westfall, she’s one of the best players ever. She’s just really technical, works hard.”

But the class of 2004 didn’t just distinguish itself on the field.

“As a group, they’ve been our leaders,” Wheaton said. “They just work like crazy, have a great attitude—like, ‘We want to enjoy this, but we want to enjoy it by working really hard.’ And they set that example for anybody.

“I know it sounds a little cliché, but they leave a stamp on us and if we can follow their lead, if we can adopt that attitude and maintain it in the future, then our program is going in just the right direction.”